Battle of the Little Bighorn by Charles M. Russell, 1903.

“This war did not spring up on our land, this war was brought upon us by the children of the Great Father who came to take our land without a price, and who, in our land, do a great many evil things… This war has come from robbery – from the stealing of our land.”

From the earliest European visitors to the Westward Expansion of the United States, white settlers often encountered the American Indians. Though many of these meetings were peaceful, the cultures more often clashed, resulting in hundreds of battles and skirmishes, between the Indians and pioneers encroaching upon their lands, as well as conflicts between the tribes and the U.S. Army. Though confrontations with the Indians virtually occurred since the first European explorers and settlers set foot on American soil, the “Indian War period” is primarily referred to as occurring between 1866 and 1890. These many conflicts are often overshadowed by other periods of U.S. history.

1540-1541 –  Tiguex War – Fought in the winter of 1540-41 by the army of Francisco Vasquez de Coronado against the 12 pueblos of Tiwa Indians along both sides of the Rio Grande in New Mexico. It was the first war between Europeans and Native Americans in the American West.

1622-1644 –  Powhatan Wars – Following an initial period of peaceful relations in Virginia, a 12-year conflict left many natives and colonists dead.

1636-1637 –  Pequot War – Taking place in Connecticut and Rhode Island, the death of a colonist eventually led to the destruction of 600-700 natives. The remainder were sold into slavery in Bermuda.

May 26, 1637 – Mystic Massacre – During the Pequot War, English colonists, with Mohegan and Narragansett allies, attack a large Pequot village on the Mystic River in what is now Connecticut, killing around 500 villagers.

1675-1676 –  King Philip’s War –  King Philip’s War erupts in New England between colonists and Native Americans as a result of tensions over colonist’s expansionist activities. The bloody war rages up and down the Connecticut River valley in Massachusetts and in the Plymouth and Rhode Island colonies, eventually resulting in 600 English colonials being killed and 3,000 Native Americans, including women and children on both sides. King Philip (the colonist’s nickname for Metacomet, chief of the Wampanoag) is hunted down and killed on August 12, 1676, in a swamp in Rhode Island, ending the war in southern New England. In New Hampshire and Maine, the Saco Indians continue to raid settlements for another year and a half.

1680-1692 –  Pueblo Revolt – In Arizona and New Mexico, Pueblo Indians led by Popé, rebelled against the Spanish and lived independently for 12 years. The Spanish re-conquered in them in 1692.

1689–1697 – King William’s War – The first of the French and Indian Wars, King William’s War was fought between England, France, and their respective American Indian allies in the colonies of Canada (New France), Acadia, and New England. It was also known as the Second Indian War (the first having been King Philip’s War).

1711 – Tuscarora War – Taking place in North Carolina, the Tuscarora War, led by Chief Hancock, was fought between the British, Dutch, and German settlers and the Tuscarora Native Americans. In an attempt to drive the colonists out of their territory, the tribe attacked several settlements, killing settlers and destroying farms. In 1713, James Moore and Yamasee warriors defeated the Indians.

1715-1718 – Yamasee War – In southern Carolina, an Indian confederation led by the Yamasee came close to exterminating a white settlement in their region. 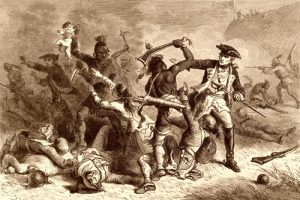 1754-1763 –  French and Indian War – A conflict between France and Britain for possession of North America. For various motivations, most Algonquian tribes allied with the French; the Iroquois with the British.

1760-1762 – Cherokee Uprising – A breakdown in relations between the British and the Cherokee leads to a general uprising in present-day Tennessee, Virginia and the Carolinas.

1763 –  Pontiac’s Rebellion – In the Ohio River Valley, War Chief Pontiac and a large alliance drove out the British at every post except Detroit. After besieging the fort for five months, they withdrew to find food for the winter.

1774 – Lord Dunmore’s War – Shawnee and Mingo Indians raided a wave of traders and settlers in the southern Ohio River Valley. Governor Dunmore of Virginia sent in 3,000 soldiers and defeated 1,000 natives.

1776-1794 – Chickamauga Wars – A series of conflicts that were a continuation of the Cherokee struggle against white encroachment. Led by Dragging Canoe, who was called the Chickamauga by colonials, the Cherokee fought white settlers in Tennessee, Kentucky, Virginia, North Carolina, South Carolina, and Georgia.

July 3, 1778 – Wyoming Valley Massacre – Following a battle with rebel defenders of Forty Fort, Iroquois allies of the Loyalist forces hunt and kill those who flee, then torture to death those who surrendered.

August 31, 1778 – Stockbridge Massacre – A battle of the American Revolution that rebel propaganda portrayed as a massacre.

November 11, 1778 – Cherry Valley Massacre – An attack by British and Seneca Indian forces on a fort and village in eastern New York during the American Revolution. The town was destroyed and 16 defenders were killed. 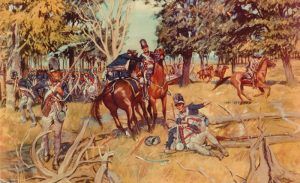 1785-1795 –  Old Northwest War – Fighting occurred in Ohio and Indiana. Following two humiliating defeats at the hands of native warriors, the Americans won a decisive victory under “Mad Anthony” Wayne at the Battle of Fallen Timbers.

1794 – Nickajack Expedition – Cherokee Chief, Dragging Canoe, and his followers, who opposed the peace, separated from the tribe and relocated to East Tennessee, where they were joined by groups of Shawnee and Creek. Engaged in numerous raids on the white settlers for several years, they used Nickajack Cave as their stronghold. In 1894, the military attacked, leaving some 70 Indians dead.

August 15, 1812 – Fort Dearborn Massacre – American settlers and soldiers are killed in an ambush near Fort Dearborn, at the present-day site of Chicago, Illinois.

January 22, 1813 – Battle of Frenchtown –  Also known as the River Raisin Massacre, it was a severe defeat for the Americans during the War of 1812, when they attempted to retake Detroit.

Sept 19 – Oct 21, 1813 – Peoria War – An Armed conflict between the U. S. Army and the Potawatomi and the Kickapoo that took place in the Peoria County, Illinois area.

1814 – Creek War – Militiamen under Andrew Jackson broke the power of Creek raiders in Georgia and Alabama after the Creek had attacked Fort Mims and massacred settlers. They relinquished a vast land tract. (See Battle of Horseshoe Bend)

1816-1818 –  First Seminole War  – The Seminole, defending runaway slaves and their land in Florida, fought Andrew Jackson’s force. Jackson failed to subdue them, but forced Spain to relinquish the territory.

June 2, 1823 – Arikara War – Occurring near the Missouri River in present-day South Dakota, Arikara warriors attacked a trapping expedition and the U.S. Army retaliated. It was the first military conflict between the United States and the western Native Americans.

1827 – Winnebago War –  Also referred to as the Le Fèvre Indian War, this armed conflict took place in Wisconsin between the Winnebago and military forces.  Losses of lives were minimal, but the war was a precedent to the much larger Black Hawk War.

1832 –  Black Hawk War – Occurring in northern Illinois and southwestern Wisconsin, it was the last native conflict in the area. Led by Chief Black Hawk, the Sac and Fox tribes made an unsuccessful attempt to move back to their homeland.

August 1, 1832 – Battle of Bad Axe – Around 300 Indian men, women, and children are killed in Wisconsin by white soldiers. 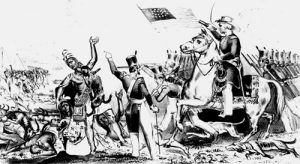 1835-1842 –  Second Seminole War – Under Chief Osceola, the Seminole resumed fighting for their land in the Florida Everglades. Osceola was captured and they were nearly eliminated.

1836-1875 – Comanche Wars – On the southern plains, primarily in the Texas Republic, there were many conflicts with the Comanche. The U.S. Military instituted official campaigns against the Comanche in 1867.

1836 – Creek War of 1836 – Though most Creeks ad been forced to Indian Territory, those that remained rebelled when the state moved to abolish tribal governments and extend state laws over the Creeks. 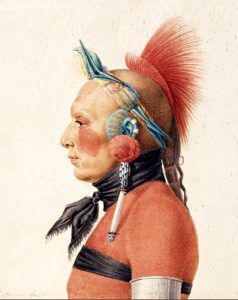 November 10, 1837 –  Battle of Stone Houses –  A Texas Ranger Company pursued a band of raiding Kichai Indians up the Brazos River, where they battled near the present-day city of  Windthorst, Texas.

1839 –  Cherokee War – This war was a culmination of friction between the Cherokee, Kickapoo, and Shawnee Indians and the white settlers in Northeast Texas.

July 1839 –  Battle of the Neches –  The principal engagement of the Cherokee War, the battle culminated after the Cherokee refused to leave Texas.

March 19, 1840 –  Council House Fight – A conflict between Republic of Texas officials and a Comanche peace delegation in San Antonio, Texas. When terms could not be agreed on, a conflict erupted resulting in the death of 30 Comanche leaders who had come to San Antonio under a flag of truce.

August 11, 1840 –  Battle of Plum Creek –  The Penateka Comanche were so angry after the Council House Fight, they retaliated in the summer of 1840 by conducting multiple raids in the Guadalupe Valley. The raids culminated in a battle between the Indians and the Texas volunteer army along with the Texas Rangers near the present-day city of Lockhart, Texas. For two days they battled and the Comanche were defeated.

June 17, 1848 –  Battle of Coon Creek –  When a company of about 140 soldiers were on their way to left join the Santa Fe battalion in Chihuahua, Mexico, they were attacked near the present town of Kinsley, Kansas by some 200 Comanche and Apache Indians.

1848–1855 – Cayuse War –  Occurring in Oregon Territory and Washington Territory, the conflict between the Cayuse and white settlers was caused in part by the influx of disease, and resulting in the Whitman Massacre and the Cayuse War.

1849-1863 – Navajo Conflicts – Persistent fighting between the Navajo and the U.S. Army in Arizona and New Mexico led to their expulsion and incarceration on an inhospitable reservation far from their homelands.

1850-1851 – Mariposa War – Spawned by the flood of miners rushing onto their lands after the California Gold Rush, some tribes fought back including the Paiute and the Yokut.

Spring, 1850 – Bloody Island Massacre – The murder of up to 200 Pomo people on an island near Upper Lake, California by Nathaniel Lyon and his U. S. Army detachment, in retaliation for the killing of two Clear Lake settlers who had been abusing and murdering Pomo people.

1853 –  Walker War – When the Mormons began to settle on the hunting grounds of the Ute Indians of Utah, they were at first friendly, then fought back.