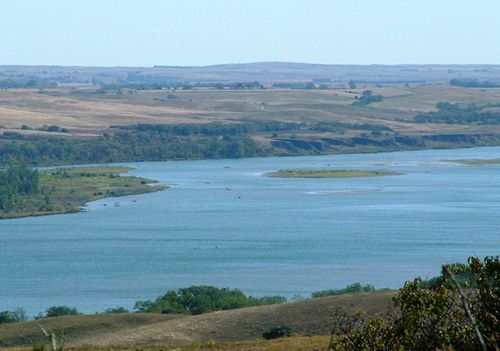 A tributary of the Mississippi River, the Missouri River, at 2,540 miles in length, is the longest river in the United States. The river played an important part in the explorations and expansion of the American West. The headwaters of the Missouri River are in the Rocky Mountains near Three Forks, Montana at an elevation of 4,045 feet, beginning at the confluence of the Jefferson and Madison Rivers, and joined about ½  mile downstream by the Gallatin River. It flows from Montana southeast through the Missouri River Basin through North Dakota, South Dakota, and Nebraska into Missouri, where it meets up with the Mississippi River north of St. Louis.

Early in 1803, the United States began negotiations to buy the port of New Orleans from France and wound up with all of the lands between the Mississippi and the Missouri River’s headwaters, in the Louisiana Purchase.

The purchase of this huge tract of land, some 828,800 square miles, sparked interest in expansion into the American West. A few weeks later, President Thomas Jefferson, an advocate of western expansion, had the U.S. Congress appropriate $2,500 to send a small U.S. Army unit to explore the west all the way to the Pacific Ocean. Along their way, they were instructed to study and make detailed reports on the Indian tribes, geography, climate, plants, and animals, as well as evaluate the potential interference of British and French-Canadian hunters and trappers who were already well established in the area.  In addition, one of Jefferson’s main objectives was for the unit to find a waterway that would connect the east to the west.

Jefferson selected 28-year-old Army captain, Meriwether Lewis to lead the expedition, afterward known as the Corps of Discovery. Lewis, in turn, selected a former Army comrade, 32-year-old William Clark, to be co-leader of the Expedition. Due to bureaucratic delays in the US Army, Clark officially only held the rank of Second Lieutenant at the time, but Lewis concealed this from the men and shared the leadership of the expedition, always referring to Clark as “Captain.”

On May 14, 1804, Lewis and Clark left St. Louis, Missouri with 45 men, a 55-foot keelboat, and two large canoes to trace the Missouri River to its headwaters for the first time. A few months later, they reached the headwaters of the Missouri River, at the confluence of the Jefferson, Madison, and Gallatin Rivers. Meriwether Lewis would write in his journal, on July 28, 1805:

“Both Capt. C. and myself corresponded in opinion with respect to the impropriety of calling either of these [three] streams the Missouri and accordingly agreed to name them after the President of the United States and the Secretaries of the Treasury and state.”

Later, after following the Jefferson River to the Beaverhead River and the Continental Divide, they believe they are nearing the headwaters of the Missouri River. However, when Meriweather Lewis ascends the final ridge toward the Continental Divide expecting to see plains and a river flowing to the Pacific, he finds even more mountains.

But, long before Lewis and Clark made their famous explorations, early trappers and traders were following the Missouri River. The first Europeans to see the river were the French explorers Louis Jolliet and Father Jacques Marquette. A misconception of the naming of the river and the state of Missouri comes from Father Jacques Marquette calling the river “Pekitanoui” meaning “muddy,” in May 1673. In actuality, the river and the state were named after the Siouan Indian tribe whose Illinois name, Ouemessourita, means “those who have dugout canoes”. Over the years, the river has also been called the Big River, Big Muddy, Emasulia sipiwi, Eomitai, Katapan Mene Shoska, Le Riviere des Missouri, Mini Sose, Missoury River, Ni-sho-dse, Nudarcha, Rio Misuri, Riviere de Pekitanoni, Riviere de Saint Philippe, Le Missouri, Le Riviere des Osages, Missures Flu, Miz-zou-rye River, Niutaci, Pekitanoui, River of the West, and Yellow River. 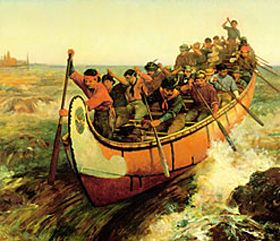 For the next several decades the Missouri River remained unexplored and uncharted until Étienne de Veniard and Sieur de Bourgmont began to travel upstream, writing descriptions in 1713 and 1714. Bourgmont was the first to use the name “Missouri” to refer to the river and he and Étienne de Veniard would later establish the first fort on the Missouri River in 1723. Fort Orleans was built somewhere around the mouth of the Grand River near Brunswick, Missouri, and was named for the Duke of Orléans.

It is unclear how far up the Missouri River Bourgmont traveled, but he was also the first European discoverer of the Platte River. The Spanish took over the Missouri River in the 1763 Treaty of Paris that ended the French and Indian War. However, they did not extensively explore the river and continued to allow French fur traders to work along the waterway.

Later, the Missouri River became the jumping-off point for all of the major trails that opened the American West, including the California, Mormon, Oregon, and Santa Fe Trails, as well as the Pony Express at St. Joseph, Missouri. The first bridge built across the Mighty Missouri was the Hannibal Bridge in Kansas City in 1869. Soon, paddle steamers began to move up the river, helping to facilitate settlement in the Dakotas and Montana. The northernmost navigable point on the Missouri before extensive navigation improvements was at Fort Benton, Montana.

Over the next century, numerous dams, dikes, and levees were built along the river for flood control, and today, 35% of the river is impounded. In fact, the only significant stretch of the free-flowing river today is at the Missouri National Recreational River, a 100 mile National Park that runs between Gavins Point Dam and Ponca State Park, Nebraska along the Nebraska-South Dakota border. The park is among the last unspoiled stretches of the Missouri River, and exhibits the islands, bars, chutes, and snags that once characterized the “Mighty Mo.” It also preserves the historic ruins of Fort Randall; Spirit Mound, an important cultural landmark to the Native Americans; and the Meridian Bridge, an engineering marvel of the 1920s. 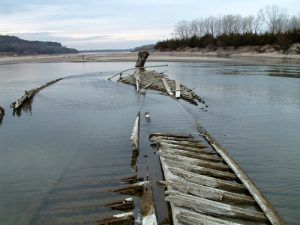 Ruins of the North Alabama steamship on the Missouri River

Overland Trails of the American West

Quest for Treasure in the Missouri River