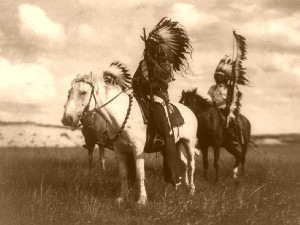 The Bates Battle occurred in northcentral Wyoming on July 4, 1874, when an Arapaho encampment was attacked by U.S. Army forces under Captain Alfred E. Bates.

During the summer of 1873, a number of settlers in the Sweetwater Mining District and the Wind River Basin fell prey to a Lakota band led by the son of the famous Sioux war leader, Chief Red Cloud. Most of these raids centered on theft of livestock and horses; however, several people were also killed. When winter began, the raids stopped, but Indians began to reappear in the Spring of 1874. This time, though, they were not Sioux, but, rather, a band of Northern Arapaho under the leadership Chief Black Coal. However, the settlers and soldiers in the area were convinced that the Arapaho, who were allies of the Sioux, were up to no good.

The Arapaho were encamped in the mountains between the eastern Owl Creek Range and the southern Bighorns, as reported by Shoshone scouts to authorities at Camp Brown. Just about that time, Lieutenant General Philip Henry Sheridan and Brigadier General Edward Otho Cresap Ord arrived in the area to lead a full-scale expedition from Camp Brown to the Big Horn Mountains to wage war.

General Sheridan soon ordered Captain Alfred E. Bates to raid the Arapaho camp which was comprised of 40 and 112 lodges. Bates, along with 60 men of the 2nd Cavalry, along with 20 Shoshone scouts under Lieutenant Robert H. Young of the 4th Infantry, and Shoshone Indians under Chief Washakie set forth on the evening of July 1, 1874. The troops moved to the northwest; but, in the meantime, the Arapaho had moved their camp and it wasn’t until July 4th, that the soldiers found them along a deep ravine and creek branching off of Nowood Creek below Snake Mountain (now called Bates Creek and Battle Mountain.)

Bates led 35 cavalrymen and 20 Shoshone against the encampment at daybreak, leaving behind the rest of the troops, broken-down horses and packs due to the rough terrain. In the meantime, Lieutenant Young led his scouts around to the other end of the village. 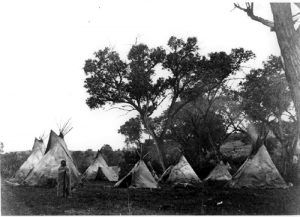 The Arapaho, having been alerted, fired from the ravine, and Bates drove them out and down the gully. In less than half an hour, the Arapaho had taken refuge in the cliffs above. Firing from the rocks, the Arapaho killed two soldiers and wounded three in just a few minutes. Bates withdrew from the village without recovering his own dead. Lieutenant Young, wounded, was in danger of being captured when a civilian named Cosgrove pulled him to safety. Meanwhile, Bates had lost track of the Shoshone who were still in the thick of the fight. Pe-a-quite fought his way into the village and was killed, and another brave died in a hand-to-hand fight in front of a lodge.

When Bates moved out, the Arapaho could not chase after them, having lost too many horses. All in all, the battle was said to have resulted in four soldiers killed and 5-6 wounded; the Shoshone suffered two killed and another 2-3 wounded; and of the Arapaho, 25 were killed and 100 wounded, including Chief Black Coal. Other reports; however, indicated the Arapaho suffered as few as ten casualties. Bates captured 350 horses of the 1200 to 1400 head associated with the village.

The battle was also referred to as the Battle of Young’s Point, the Battle of Snake Mountain, and the Nowood Battle. The battle site, listed on the National Register of Historic Places is located near Lysite, Wyoming.