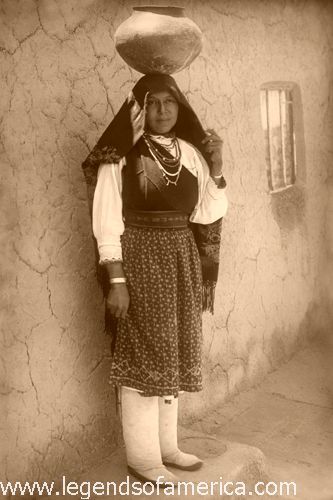 The Tiwa Indians, also known as Tigua, are a group of Tanoan Pueblo tribes which live in three geographic regions, including Taos and Picuris in northeast New Mexico, Sandia and Isleta near Albuquerque, New Mexico, and at Ysleta del Sur, near El Paso, Texas. Traditionally, they spoke one of three Tiwa languages, though, over the years, they began to switch to Spanish or English.

They were first mentioned by Francisco Vasquez de Coronado, in reference to a community that he referred to as both Tigua and Tiguex, when he encountered them during his expedition in 1540 into what is now New Mexico. Receiving a friendly reception, Coronado found them growing corn, beans, and various melons, as well as hunting local game, and making robes of skins, feathers, and cotton. 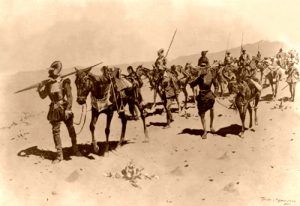 However, when Coronado and his men decided to winter at Tiguex, they demanded that the Indians provide some 300 pieces of cloth to clothe the army, even resorting to stripping the cloaks and blankets from the Indians’ backs. The Tiwa retaliated by running off and killing their herd of horses.

The Spanish then attacked, in what is now known as the Tiguex War, the first battle between Europeans and Native Americans in the American West. During the winter of 1540-41, 12 pueblos of Tiwa Indians along both sides of the Rio Grande, north and south of present-day Bernalillo, New Mexico, battled with the Spanish. Finally, the Indians surrendered and though they were “pardoned,” the Spaniards proceeded to burn at the stake, 200 of the captives, of whom about half were shot down in an attempt to escape the torture. The war and the many diseases that the Spanish brought, later resulted in the abandonment of many of the villages.

Afterward, Europeans were no longer welcomed at the pueblos and often were attacked. This, however, did not stop the Spanish missionaries and many new inhabitants who would come later. In 1629, it was estimated that the Tiwa were living in eight pueblos with about 6,000 inhabitants. Though many of the original Tiwa communities were situated in the midst of the inhospitable desert, it was bountiful with game and water.

However, in addition to the Spanish encroachers, they were also were forced to contend with the fierce Apache Indians, who were constantly raiding them. This resulted in the later abandonment of two pueblos including Chilili in the early 1670s, Quaraie about 1674, and Tajique the following year.

By the time of the Pueblo Revolt, in which the Indians rebelled against Spanish authority in 1680, the Tiwa were living primarily at the pueblos of Puaray, Sandia, Alameda, Isleta, Taos, and Pecuris. When Isleta was stormed, about 500 of the Indians were taken captive, marched to El Paso, Texas and soon settled at the new Pueblo of Ysleta del Sur. Of the remaining Isleta and Sandia peoples, they fled to Tusayan, Arizona where they lived with the Hopi Indians before returning to New Mexico in the early 1700s. Portions of the other Tiwa pueblos were burned, but the Indians rebuilt all but Alameda and Puaray.

Today, the Tiwa still live at the Isleta, Picuris, Sandia, and the Taos pueblos in New Mexico, and at the Pueblo of Isleta del Sur in El Paso, Texas.