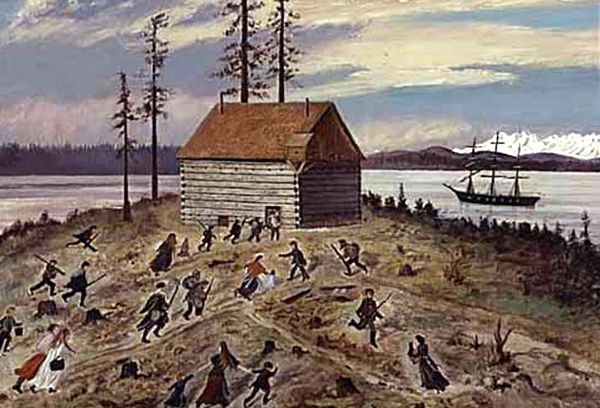 Part of the Puget Sound War, the Battle of Seattle occurred between the U.S. Navy and warriors of various tribes of the area on January 26, 1856. As a result of the treaties of 1854-55 not being ratified by Congress for more than three years, and many of the benefits for tribes were decreased, delayed, or disputed, a number of tribal leaders took up arms to force a better agreement, or to expel the whites from their traditional lands. By late 1855, European American settlers in the Puget Sound region were in danger of armed attack.

On the early morning of January 26, 1856, after months of raids and clashes with federal troops in southern King County and in Thurston County, Washington, Native Americans attacked Seattle. Previously warned by friendly Indians, most of the settlers had barricaded themselves in a blockhouse. Attacking from the shelter of trees along Seattle’s harbor, the warriors were driven off by artillery fire from the U.S. Navy sloop-of-war Decatur, which was anchored in Elliott Bay. Volunteers under militia Captain Christopher C. Hewitt also fired upon the attackers, but, it was primarily the Decatur’s guns that kept the Indians at a distance.

Sporadic exchanges of fire continued until about 11:45 a.m. when the Indians ceased their attack for a brief period. Of those settlers who remained, they took advantage of the lull to evacuate the women and children to the Decatur and another ship, the Brontes. However, when settlers attempted to retrieve arms and valuables from their abandoned homes, the Indians resumed firing. The firing continued throughout the afternoon. In the evening, when scouts reported that the warriors were preparing to light a fire to settler dwellings, the Decatur shifted its fire to the homes, damaging several. By 10 p.m., all firing had stopped.

Two settlers and an unknown number of Indians perished in the all-day “Battle of Seattle.” Estimates of the number of Indians killed varied wildly though one historian would later write that the Indians had admitted to 28 dead and 80 wounded.

Some of the tribes involved in the attack were the Klickitat, Spokane, Palouse, Walla Walla, Yakama, Kamialk, Nisqually, and Puyallup.