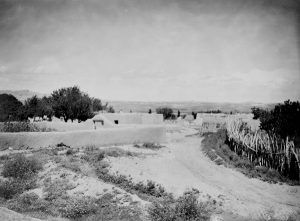 The Tiguex War was the first-named war between Europeans and Native Americans in the United States. It was fought between the Francisco Vázquez de Coronado expedition members against 12 pueblos of Tiwa Indians and other Puebloan tribes along the Rio Grande in the area of Bernalillo, New Mexico, in the winter of 1540-41. The group of pueblos was known as Tiguex (Teewesh)

The indigenous Tiwa Indians and their ancestors had lived in the area for thousands of years, residing in multi-storied buildings of up to a thousand people. Along the river, they raised several varieties of corn, along with squash, beans, and cotton. They also wove fine cotton cloth and traded with other tribes for buffalo hides and ornamental and ceremonial goods such as turquoise, seashells, and exotic feathers. They were generally peaceful, though warfare was not unknown between the Tiwa and the other tribes in the area.

In August 1540, scouts of the Spanish Coronado Expedition arrived in the area. They established a camp at the site of Ghufoor (also called Coofor or Alcanfor), one of the largest of the Tiguex pueblos. They struck an agreement with the pueblo leaders, including a man named Xauían, who was called Juan Aleman by the Spanish. The leaders agreed to allow the Spanish to erect shelters nearby. The entire army of nearly 2,000 people, including 350 Spanish soldiers, 350 servants and camp followers, and 1300 Native American warriors from Mexico, arrived by December. The people were accompanied by herds of horses, cattle, goats, and sheep.

However, when the main group of the Spanish arrived and experienced the cold winter, they were not satisfied with living in “straw huts” and soon took over the pueblo buildings. The native residents were forced out of their homes with nothing but their clothes and took shelter in other area pueblos.

The expedition also arrived in need of food, shelter, and warm clothing. They sometimes bartered for what they needed but more often just took it. Their livestock grazed in the Tiguex fields, consuming dry corn stalks needed by the Tiguex for winter fuel. Inevitably, a Spanish soldier assaulted a Pueblo woman, wife to a Tiguex man. The Tiguex had been pushed to their limit, and violence ensued.

The natives first retaliated by killing up to 60 of the expedition’s free-roaming horses and mules. As a result, Coronado declared war against the Puebloans and sent a large force of Spanish and Mexican Indian allies to conquer a Tiwa pueblo the Spaniards called Arenal. All of the defenders were killed, including an estimated 30 people who were the Spaniards burned alive at the stake.

For three months, the Spanish and Tiguex fought. Spanish tactics were to react to any provocation with immediate, fierce violence. The Tiguex barricaded themselves in their villages, firing arrows from loopholes or the roofs of their multi-storied dwellings. The Spanish and their Mexican allies attacked, scaling walls to reach the rooftops, setting fires to drive the Tiguex into the open, where they were easy prey for Spanish cavalry. The superior weapons, horses, and overwhelming numbers of the Spanish army preordained their victory. Many Tiguex men were killed in battle, and women and children were enslaved.

The Tiwa abandoned their riverside pueblos and made their last stand in a mesa-top stronghold the Spaniards called Moho. When the Indians ran out of water, they tried to escape in the night, but the Spanish killed almost all the men and several women. Afterward, the women were held captive as slaves. 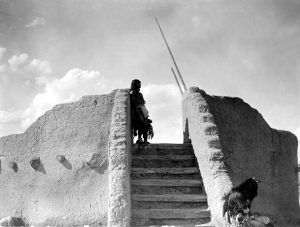 By March 1541, the war was over. By that time, hundreds of Tiguex had been killed, along with a smaller number of Spanish and Mexican soldiers. Many Tiguex villages had been burned or abandoned. However, native resistance had accomplished little, and the Spanish remained in control. The Tiguex, reduced in numbers, many living in the mountains away from their homes, now fully understood the implacable foe in their midst.

Coronado then set off on his journey across the Great Plains to central Kansas in search of the mythical riches of Quivira. Upon his return, the Towa Indians of the Jemez and Pecos Pueblos, were hostile to the Spanish resulting in a battle and siege against Pecos.

In the meantime, the Tiquex people had returned to their pueblos, but they were later abandoned probably due to epidemic diseases introduced by Hispanic colonists. This would later make possible the occupation of their former farmlands by the newcomers and the eventual foundation of both Albuquerque and Bernalillo.

The Tiguex War was one of many conflicts between European and Native American groups during the New World’s exploration, conquest, and settlement. Though the unfairness and violence to the native population was appalling and deserving of condemnation, it was from these events that our current American societies emerged.

Today, the culture of the American Southwest is a fusion of native and European cultures: our language, food, philosophy, architecture, art, and religion came from both the American Indians and Europeans. For better or worse, the Tiguex War was part of the bloody birth of a New World. 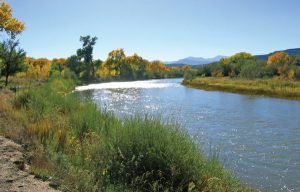 The Rio Grande in New Mexico

Coronado’s Expedition to the Southwest