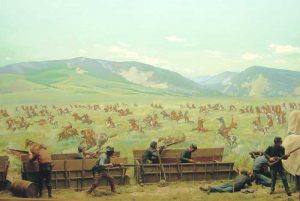 The Wagon Box Fight, taking place in northeast Wyoming on August 2, 1867, was fought between U.S. Soldiers and Sioux warriors during Red Cloud’s War.

Early on the morning of August 2, 1867, nearly 1,000 Sioux warriors, under Chiefs Red Cloud and High Back Bone, struck the camp. Many of the soldiers and civilians were caught outside the camp or in transit to or from Fort Phil Kearny and either fought their own fights or escaped.

Captain James Powell ordered the 14 wagons corralled, behind which he, Lieutenant John C. Jennes, 24 enlisted men, and 6 civilians fought valiantly against the attack.

The Sioux began their attack in the early morning by sending a wave of about 500 braves rushing toward the wagon box circle. Powell ordered his men to await firing until the warriors were very close. The mounted charge from the southwest was beaten back by judicious fire from the soldier’s new Springfield-Allin breech-loading rifles. In the second attack, Lieutenant Jenness remained standing, ignoring the pleas of his men, stating “I know how to fight Indians.” He was wrong. Within just a few minutes, a bullet hit him square in the forehead. The defenders repulsed eight charges between 7 am and 1:30 p.m.

After several successive waves of warriors were sent in for the attack, the Sioux re-gathered for a massive attack. However, Major Benjamin Smith, 100 men arrived with a howitzer in tow. They had been notified by survivors who were outside the corral and had made it back to the fort. Upon the first firing of the cannon, the Indians fled. Three men in the corral were killed and two were wounded; four more defenders were killed outside the enclosure.

About four woodcutters and 14 soldiers hiding in the woods came back when the fight was over. Powell reported killing 60 Indians and wounding 120, but later reports estimated about half that. 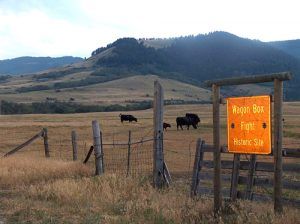 The disproportionate casualties and the soldiers’ survival was primarily due to the recent addition of breech-loading weapons, that had been supplied as a direct result of the Fetterman Massacre.

The site, located near Story, Wyoming is operated by the Wyoming State Parks.