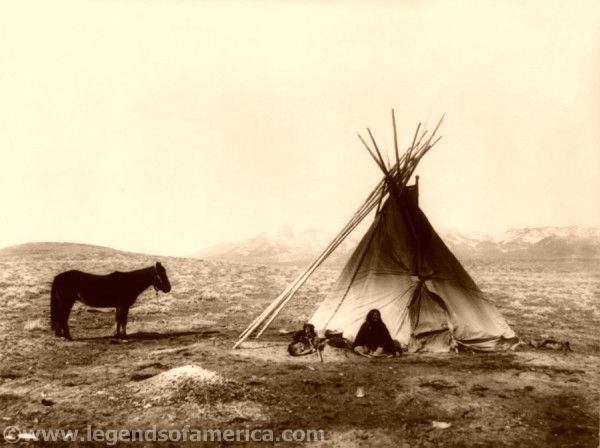 An important tribe of the Shoshonean Indians, the Ute were related linguistically to the Paiute, Chemehuevi, Kawaiisu, and Bannock tribes. They were originally divided into seven nomadic and forest-dwelling tribes including the Capote, the Mouache, the Parianucs, the Tabeguache, the Uintah, the Weeminuche, and the Yampa. When European explorers and settlers first pushed westward, the Ute occupied the entire central and west portions of Colorado, and the east portion of Utah, and the upper portion of the San Juan region of New Mexico.

Ute, which means “land of the sun” also, gave the state of Utah its name. The bands were scattered over an area comprising some 150,000 square miles, subsisting on wild game, fish, nuts, berries, and greens. They first lived in wickiups before they later adopted the use of the teepee from the Plains tribes, making for easier movement.

The Ute practiced polygamy, with a man often marrying sisters or adding the widow of a brother to his wifely “harem.” Their religious beliefs were based in nature with an animalistic type of worship. Believing they were closely related to the bear, the Utes gathered every Spring for the annual Bear Dance, also known as “Momaqui Mowat.”  They also gathered in the Summer for the Sun Dance, their most important ceremony. During this event, participants would fast for four days in the Sun Dance Lodge, undergoing a quest for spiritual power. 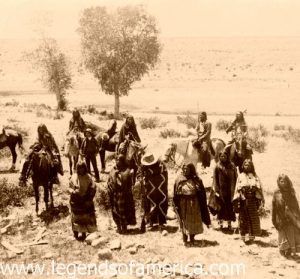 Life changed dramatically when the Spanish introduced them to horses, which the Ute referred to as “magic dogs.” Later, the Mormon settlers also introduced them to agriculture which changed their lifestyle once again. The Northern Ute, however, resisted agriculture, not wanting to settle in one place. The Utes also became involved in the trading of horses as well as in the slave trade.

They were always a warlike people, and when they acquired horses, it intensified their aggressive character. They soon became respected warriors and feared enemies, often engaging in raiding parties. As more and more Mormon settlers invaded their lands, the Northern Ute began to raid those many settlers, leading to the Walker War in 1853.

The first treaty with the Ute, one of peace and amity, was concluded on December 30, 1849. In October 1861, the Uintah Valley was set apart for the Uinta tribe, but the remainder of their land was taken by the government. Two years later, in 1863, the Tabeguache were assigned to a reservation. Another treaty signed in March 1868, created a reservation in Colorado for the Tabeguache, Moache, Capote, Wiminuche, Yampa, Grand River, Uinta, again with the remainder of their lands relinquished to the government. Over the next few years, the reservation lines would change as portions of the treaties were repealed and lands restored to the public domain.

In 1870, one of the greatest leaders of the Ute, Chief Ouray, traveled with his wife to Washington, D.C. hoping to save his people and their lands. However, his efforts would ultimately be in vain. 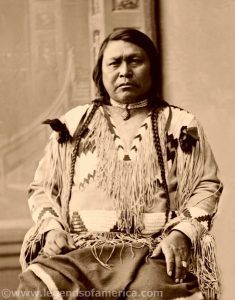 In July 1879, about 100 men of the White River Agency in Colorado, roamed from their reservation into southern Wyoming to hunt. During this time, a forest fire was started by railroad men which resulted in a great loss of timber. Blamed on the Ute, the Indians were ordered back to their reservation, where they were to remain. In September of that year, Indian Agent Nathan C. Meeker was assaulted after a quarrel with a Ute man. In turn, he requested military aid which was granted. Orders were then issued for the arrest of certain Ute charged with the recent forest fires and Major Thornburgh was sent into the area with a force of 190 men.

Suspecting the outcome, the Indians armed themselves and informed Meeker that the appearance of the troops would be regarded as an act of war. On September 29, 1879, before they arrived, the Indians attacked the agency, burned the buildings, and killed Meeker and nine of his employees. Meeker’s wife, daughter, and another girl were held as captives for 23 days. The event is known as the Meeker Massacre.

Soon, U.S. troops arrived in masse and the Ute were forced back on their reservations. With the possible exception of the Ghost Dance outbreak of the Sioux in 1890, the massacre was probably the most violent expression of Indian resentment toward the reservation system.

Two years later, all of the Ute had been removed to reservation lands in Utah and Colorado.

Today, the Ute have diversified to include a number of different income sources for the reservations including farming, ranching, oil, gambling, and tourism. Each reservation operates its own government which continues to promote its heritage. 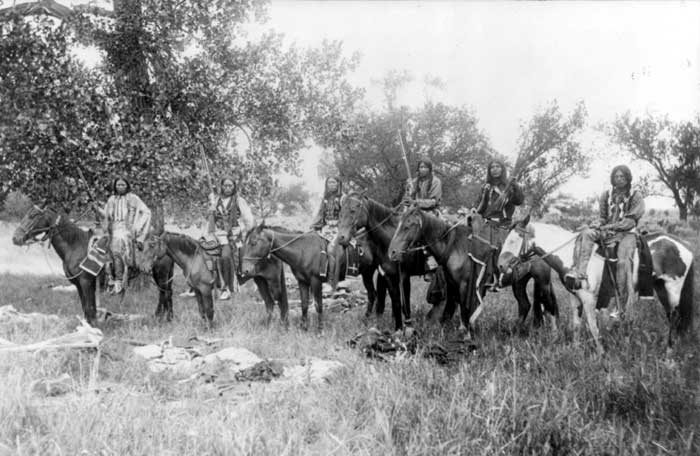 Chief Ouray –  A Man of Peace

2 thoughts on “The Ute Tribe – Roaming the Rockies”