Native Americans, or the indigenous peoples of the Americas, are the pre-Columbian inhabitants of North and South America and their descendants. Those who live within the boundaries of the present-day United States are composed of numerous distinct tribes, bands, and ethnic groups, many of which survive as intact, sovereign nations.

Most authorities agree that the first evidence of people inhabiting North America indicates that they migrated here from Eurasia over 13,000 years ago, most likely crossing along the Bering Land Bridge, which existed during the Ice Age. However, some historians believe that people migrated into the Americas much earlier, up to 40,000 years ago. These early Paleo-Indians spread throughout the Americas, diversifying into hundreds of culturally distinct nations and tribes.

Application of the term “Indian” originated with Christopher Columbus, who thought he had arrived in the East Indies in his search for Asia. However, considerable evidence supports successful explorations that led to the Norse settlement of Greenland, the L’Anse aux Meadows settlement in Newfoundland, and potentially others some 500 years before Columbus landed in the Bahamas. From the Native American aspect, many tribes’ oral histories indicate they have been living here since their genesis, as described by many creation myths.

By the time European adventurers arrived in the 15th century, scholars estimate that more than 50 million people were already living in the Americas. Of these, some 10 million lived in the region that would later become the United States. As time passed, these migrants and their descendants pushed south and east, adapting as they went. With these new arrivals came centuries of conflict and adjustment between Old and New World societies. Today, Native Americans account for about 1.5 percent of the United States population, many of whom continue to take pride in their ancestral traditions — still practicing the music, art, and ceremonies that took place many years ago. 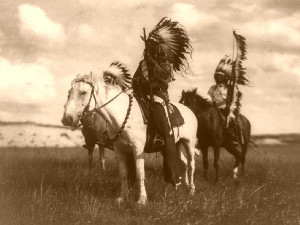 May the Warm Winds of Heaven
Blow softly upon your house.
May the Great Spirit
Bless all who enter there.
May your Mocassins
Make happy tracks
in many snows,
and may the Rainbow
Always touch your shoulder.

Medicine According to Cherokee Legend

The Role of Astronomy and Mythology In Native American Culture