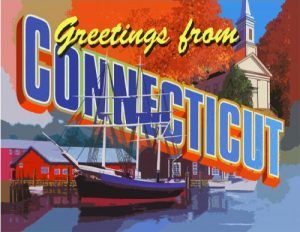 One of the original 13 colonies and one of the six New England states, Connecticut, is located in the northeastern corner of the country. Connecticut takes its name from the Mohegan word, “Quinnehtukqut,” referencing the long, winding river flowing through the area utilized by Native Americans for thousands of years. It was established by English Puritans from the Massachusetts Bay Colony in 1633 to compete with Dutch traders along the Connecticut River. It was designated the Constitution State in 1959 because the Fundamental Orders of 1638/1639 were the first written constitution in history. 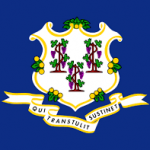 Connecticut’s flag, adopted in 1897, displays a white baroque shield with three grapevines, each bearing three bunches of purple grapes on a field of blue. The banner below the shield reads “Qui Transtulit Sustinet,” which is Latin for “He who Transplanted Sustains Us,” Connecticut’s state motto. The vines stand for the first settlements of English people who began to move from Massachusetts in the 1630s. These settlements were thought of as grapevines that had been transplanted. 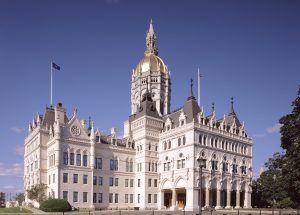 State Motto – He who Transplanted Sustains Us 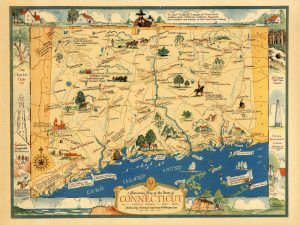 One of the original 13 colonies and one of the six New England states Connecticut was the fifth state to join the union in 1788. The state began as three distinct settlements of Puritans from Massachusetts and England, which later combined under a single royal charter in 1663.

Before Europeans arrived, the area was inhabited by various Algonquian tribes. The Dutch first explored it in 1614, and in 1623 the Dutch West India Company was regularly trading for furs in the area they called New Netherlands. Ten years later, they built a fort called “House of Hope” to protect themselves from the Pequot Indians. Area residents were involved in the Pequot War in 1636-37. With the encroaching English colonists, the Dutch agreed to the Treaty of Hartford in 1650, and by 1654 they were gone.

The first English colonists came from the Bay Colony and Plymouth Colony in Massachusetts, forming Windsor in 1633, Wethersfield in 1634, and in 1636, at Hartford and Springfield. Hartford was founded when Reverend Thomas Hooker and Reverend Samuel Stone led a group of about 100 people to the area. It was named for Stone’s place of birth in Hertford, England. Thomas Hooker, who is called “the Father of Connecticut” today, was an important figure in the early development of colonial New England. The state was early known as the “land of steady habits” for its political, social, and religious conservatism.

Initially, Connecticut started as an agricultural community, but because of its rocky soil, the state turned into textile and machine manufacturing by the mid-1800s. Because of its abundant water power, the heavy industry continued to dominate the economy through much of the 19th and early 20th centuries — making it a leading producer of iron, vulcanized rubber, rolled brass, textiles, bicycles, clocks, helicopters, and firearms.

Today Connecticut lies amid a great urban-industrial complex along the Atlantic coast, surrounded by sprawling suburbs, and in the northeastern corner can be found traditional farming communities. It hosts a diverse array of cultures and lifestyles in its urban centers, beaches and harbors, its forest-clad hills, and its village greens surrounded by houses dating from the 17th and 18th centuries. 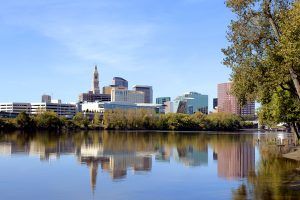 Hartford, in the north-central part of the state, is the capital. In area, it is the third smallest U.S. state but is among the most densely populated. Its income per capita is among the highest in the country.