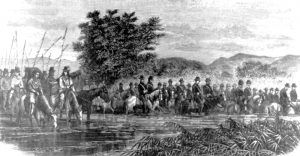 General Crook’s army before the Battle of the Rosebud, Frank Leslie Illustrated Newspaper, 1876

Montana’s Battle of the Rosebud Creek occurred on June 17, 1876, between the U.S. Army and its Crow and Shoshone allies against the Lakota Sioux and Northern Cheyenne during the Great Sioux War of 1876.

In the summer of 1876,  Brigadier General George Crook, along with 1,050 soldiers and 260 Crow and Shoshone scouts, had come north from Wyoming to seek out and force the Sioux to accept reservation confinement.

On the morning of June 17, 1876, General Crook and his men were taking a rest near the headwaters of Rosebud Creek when they were surprised by an organized attack of an equal or even greater number of warriors lead by Sioux Chief Crazy Horse and Cheyenne Chiefs Two Moon, Young Two Moon, and Spotted Wolf. The early warning and delaying action by Crook’s Indian allies saved his command from a devastating surprise attack. The long and bloody engagement lasted for six hours as charges and counter-charges were made across a three-mile-wide front.

Estimates of casualties by both the soldiers and the Indians vary widely, with Crook and his officers reporting different numbers from 10-28 killed and 21-56 wounded. The warriors suffered similar casualties. 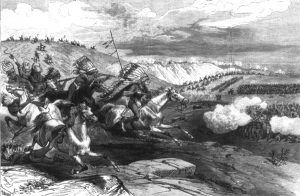 Crook claimed victory because he and his men still occupied the battlefield at the end of the day. However, concerned for his wounded and short on supplies, the men quickly retraced their steps and returned to their camp on Goose Creek, near Sheridan, Wyoming. There, they would remain for the next seven weeks awaiting reinforcements. The Shoshone and Crow allies left the army shortly after the battle. Eight days later, these same warriors defeated Lieutenant Colonel George Armstrong Custer’s column at the Battle of the Little Bighorn.

Today, the battle site is preserved at the Rosebud Battlefield State Park in Big Horn County, Montana. The site was listed on the National Register of Historic Places in 1972 and was further designated a National Historic Landmark in 2008.

The Park is located on County Road 42, about 11 miles southwest of Kirby, Montana.