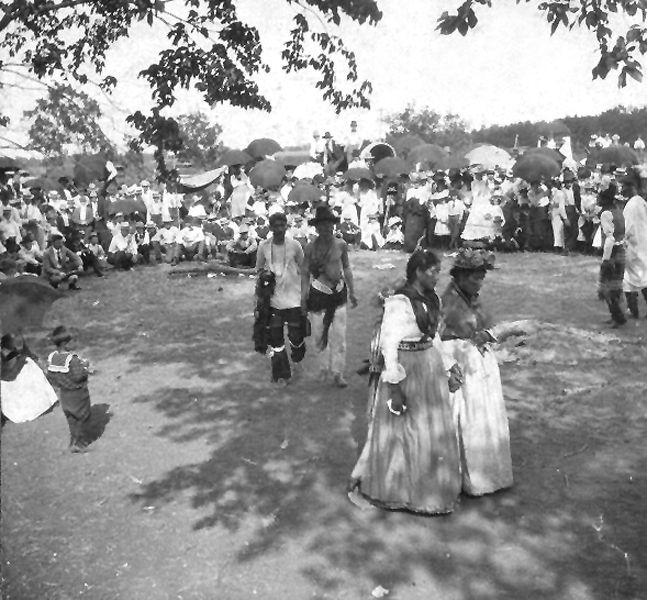 The Shawnee are an Algonquian-speaking Native American tribe whose original origins are unclear. But, by 1600, they were living in the Ohio River Valley in the present-day states of Ohio, Kentucky, Pennsylvania, West Virginia, and Indiana. At this time, they were estimated to have numbered about 10,000 people. Their name comes from the word “shawun,” meaning “southerner.”

The Shawnee are traditionally considered the Lenape (or Delaware) of the East Coast mid-Atlantic region, as their “grandfathers” and the source of all Algonquian tribes. They shared an oral tradition with the Kickapoo that they were once members of the same tribe. The identical language of the two tribes supports this oral history and the fact that they were both living in northeast Ohio before European contact. They also had a special friendship with the Wyandot, who they referred to as their “uncles.”

The Shawnee divided themselves into different clans, and their principal leaders could only come from the “Chillicothe” clan. When a village was called Chillicothe, it meant that it was home to the principal chief, the “capital city” of the Shawnee. Their chiefships were hereditary and held for life. The tribe was patrilineal with descent and inheritance traced through the father. War chiefs were selected based on merit and skill. 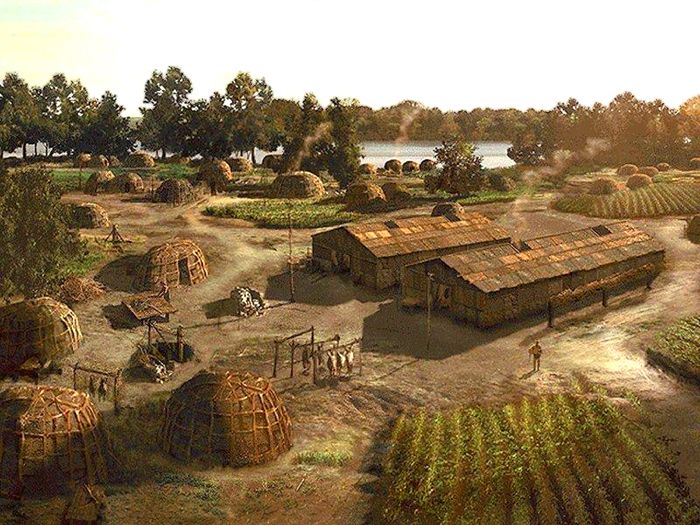 During the summer, the Shawnee gathered into villages of bark-covered longhouses, with each village usually having a large council house for meetings and religious ceremonies. They separated into small hunting camps of extended families and lived in wigwams in the fall. Men were warriors and did the hunting and fishing, while the women were responsible for farming and gathering nuts, fruits, and edible roots.

Beginning in about 1630, the Iroquois Confederacy started to raid the tribes of the Ohio Valley and pushed many of the tribes westward. The Shawnee broke into numerous bands and scattered to South Carolina, Alabama, Tennessee, Illinois, Virginia, Maryland, and Georgia. Ironically, the Iroquois never occupied the valley but maintained it as a hunting ground. At this time, the Shawnee gained a reputation for being wanderers, but this was, by necessity, not choice. 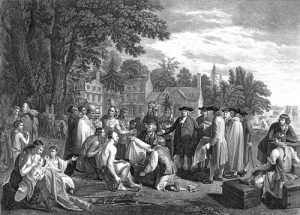 In 1682, the Shawnee in Ohio and Pennsylvania made a peace treaty with William Penn, an English nobleman, Quaker, and founder of the Province of Pennsylvania. This was the first treaty with the whites in which the Shawnee participated. When Thomas Chalkley, a minister of the London society of Quakers, visited the tribe in 1706, he mentioned that among the peculiarities of the Shawnee was its custom of admitting women to its councils, stating:

“In the council was a woman who took a part in the deliberations of this council, as well as upon all important occasions. On the interpreter being questioned why they permitted a woman to take so responsible a part in their councils, he replied that some women were wiser than some men and that they had not done anything for years without the council of this ancient, grave woman, who spoke much in this council.”

The Quakers established schools, flour mills, and sawmills amongst the Shawnee through the years.

As the power of the Iroquois weakened, many of the Shawnee who had fled to other parts had moved back to the Ohio Valley by 1730. By this time, the French and English trading and military forces attempted to make allies of the various tribes and develop trade with them.

By the late 1730s, pressure from colonial expansion produced repeated conflicts. The Shawnee communities were affected by the fur trade, in which furs were often traded to European traders for rum or brandy, leading to serious social problems related to alcohol abuse. Several Shawnee communities in Pennsylvania opposed the sale of alcohol in their communities, and as a result, some 400 Shawnee migrated from Pennsylvania to Ohio, Kentucky, Alabama, and Illinois in 1745. 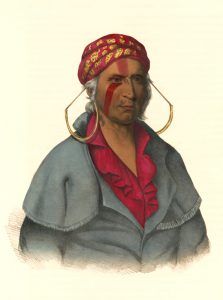 Before 1754, the Shawnee had a headquarters in Virginia but moved across the Alleghenies to join the people further west. The Shawnee first became allies of the French in the French and Indian War (1754-1763) until 1758, when they switched sides and supported the British in 1758. At that time, the British entered into the Treaty of Easton with 13 tribes, including the Shawnee, which promised them rights to their hunting grounds in the Ohio River Valley and to refrain from establishing colonial settlements west of the Allegheny Mountains.

However, this peace lasted only until Pontiac’s War erupted in 1763. Dissatisfied with the British postwar policies, warriors from numerous tribes joined the uprising to drive British soldiers and settlers out of the region. Later that year, the English issued the Proclamation of 1763, which legally confirmed the 1758 border as the limits of British colonization, with the land beyond reserved for Native Americans. Though colonists were prohibited the colonists from crossing the border, they continued to move westward, and the rebellion lasted until 1766. Afterward, relations between British colonists and Native Americans, which had been severely strained during the French and Indian War, reached a new low.

In 1768, the Treaty of Fort Stanwix extended the boundary westward, giving the British colonists claims to West Virginia and Kentucky. Afterward, Anglo-Americans began to settle in the Ohio River Valley in great numbers. As a result, several area tribes who held treaty rights to hunt there began to attack the settlers. At this time, the Governor of Virginia was John Murray, 4th Earl of Dunmore, who declared war on the Indians in May 1774. A Shawnee leader named Cornstalk led his tribe against British colonists in the war. Lord Dunmore’s War ended soon after Virginia’s victory in the Battle of Point Pleasant in October 1774. Afterward, Lord Dunmore signed agreements with the Iroquois, which ceded the “hunting grounds” across the Ohio River, including Kentucky and West Virginia, to the British.

During the American Revolution, most Shawnee fought alongside the British against the Americans, believing that Britain would prevent the colonists from encroaching further upon their lands. However, some of the Shawnee remained neutral. After the British lost the war, the Shawnee continued to resist Anglo-American settlement. They were active in the Northwest Indian War of the 1790s until they and other tribes were defeated at the Battle of Fallen Timbers in 1794. The Shawnee were then forced to surrender most of their lands in Ohio by signing the Treaty of Greenville in 1795.

Some Shawnee, however, hoped to reclaim their Ohio lands. One of these men was Chief Tecumseh, who united several tribes to fight against settlement west of the Appalachian Mountains. Tecumseh’s War began in 1810 and officially ended with the Battle of Tippecanoe in 1811. However, the Shawnee and other tribes continued their fight with the Americans into the War of 1812. Chief Tecumseh was killed at the Battle of the Thames in October 1813, ending his war with the British.

With the Treaty of Fort Meigs in 1817, The Shawnee effectively ceded all their lands to the U.S. Government and were placed three reservations in present-day Ohio. They shared these lands with some Seneca who had migrated west from New York. Other Shawnee groups rejected the treaty and migrated independently to Missouri, settling near Cape Girardeau. From this group, some later moved into Louisiana. These bands were joined by other Shawnee groups from Alabama and Ohio, and some relocated into Arkansas and Texas.

After Missouri joined the Union in 1821, the Treaty of St. Louis was made in 1825, and 1,400 Missouri Shawnee were relocated from Cape Girardeau to a reservation in northeastern Kansas. Located south of the Kansas River and west of the Missouri River, the 1.6 million-acre reservation extended west for many miles, but the Shawnee chose to occupy only a small portion. The  Kanza and Osage shared the reservation. The numbers of the Shawnee increased when more of their tribe later began to arrive. The spiritual leader Tensquatawa, the Shawnee Prophet, arrived in 1828 along with about 200 Shawnee.

Between 1831 and 1833, the United States forced the Shawnee to give up their land claims in Ohio. The Lewiston group of the Seneca–Shawnee migrated directly to Oklahoma, and, shortly after that, the Wapakoneta and Hog Creek groups moved to the Shawnee Reservation in Kansas. By 1833, only Black Bob’s band of Shawnee resisted removal, but they too were moved to northeastern Kansas in 1833. 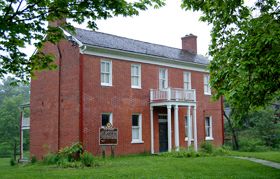 The Shawnee Indian Methodist Mission and school were established for the Shawnee, Delaware, and other Indian nations in 1839. Construction continued until 1862. The building still stands today in Fairway, Kansas, and is a National Historic Landmark and state historic site.

By 1840 many of the scattered groups of the Shawnee migrated to Indian Territory (Oklahoma) and dwelled along the Canadian River in the Choctaw and Creek Nations. Being absent from the Kansas Shawnee reservation, they became collectively referred to as the “Absentee Shawnee.”

In the meantime, those Shawnee who lived in Kansas were visited by a few white men, aside from the missionary workers. The French Chouteau brothers had established trading posts among the Shawnee and Delaware in 1828 and 1829. Samuel Conatzer came in 1844, and a nephew of Davy Crockett arrived in 1847. A few other white men drifted into their country over the years, but this would change drastically in 1854 when Kansas was opened to settlement. At this time, the U.S. government reduced the Kansas reservation to 160,000 acres and parceled out the rest of the land in 200-acre allotments to the Indians that lived there. Immediately, Kansas was in the midst of a struggle between the Free State and Pro-slavery forces, and the state became a battleground.

Many of the Shawnee began to flee, with some joining the Cherokee on their reservation in Oklahoma. Those with Southern sympathies joined the Absentee on the Canadian River. Of these, some served in the Confederate army during the Civil War.

In 1869 the remnant of the Shawnee tribe living in Kansas was also sent to Oklahoma to live with the Cherokee. The old missions, famous as the first Christian educational institutions in Kansas, were closed or converted into houses of worship for the white people.

Other bands of Shawnee that the Federal Government does not recognize live in Ohio, West Virginia, Virginia, Louisiana, Kentucky, Kansas, Illinois, and Maryland.

Today their total population is estimated at 14,000.