Located in forbidding Apache Pass, a landmark on the old Butterfield Overland Stage Road, Fort Bowie, Arizona played a significant role in the wars with the Chiricahua Apache. Here, in February 1861, even before the fort was established, Lieutenant George Bascom faced Cochise in a dramatic confrontation that touched off a quarter-century of bloody hostilities between the Chiricahua and white invaders, and a personal ten-year war between Cochise and the U.S. Army. This event is now known as the Bascom Affair.

General James H. Carleton, leading a Federal army eastward in 1862 to head off the Confederate invasion of New Mexico, fought for two days, July 15th and 16th, in a battle with the Apache for control of nearby Apache Spring. 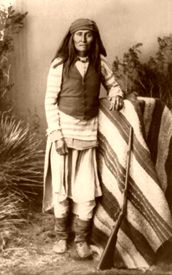 This battle occurred when an advance guard of 96 California volunteers, marching toward the San Simon River along the old Butterfield Road through Apache Pass. As they approached the abandoned stage station, Cochise and his ally, Mangas Coloradas, with a combined force of about 150 warriors, ambushed the rear of the column. The Californians countermarched from the station, driving the Apache into the hills, only to find they had taken up new positions around the Apache Spring. The Californians attacked again and finally reached the water, after dispersing the Apache from rock fortifications commanding both flanks of the spring.

This battle led directly to the establishment of Fort Bowie. Sergeant Albert Fountain chronicled the event:

“The situation was by no means an enviable one. Men and officers were worn out with fatigue… but water we must have, and to obtain it we must force the enemy’s almost impregnable position: garrisoned with the bravest warriors of the combined Apache tribes.

Our line dashed forward and advanced under continuous and galling fire from both sides of the canyon until we reached a point within 50 yards of the spring. Then from the rocks and willows above the spring came a sheet of flame.

I ordered the men to fix bayonets and make one dash for the summit and the next moment we were over a rough stone wall and on the inside of a circular fortification some 30 feet in diameter; 50 or more Indians were going out and down the hill on the opposite side.

As we carried the hill a cheer came up from down below, as our comrades dashed to the spring with camp kettles and canteens. Then fire was opened upon them from the opposite hill, but we turned a plunging fire upon the enemy, and they were soon full flight. The howitzers were brought into action, and from our elevated position we could see hundreds of Indians scampering to the hills to escape the bursting shells.”

Thereafter, until the final surrender of Geronimo, the post operated as a base for scouts, patrols, and major offensives against the Apache. Most notably, Fort Bowie served as headquarters of General George Crook and his successor Nelson A. Miles in the campaigns deep into Mexico that brought about the surrender of Geronimo and his band. From the Fort Bowie parade grounds, in September 1886, Geronimo and his people started on their journey to Florida and imprisonment. The Fort Bowie National Historic Site is operated by the National Park Service.