Powder River (August 16, 1865) – While Captain Frank North, leading a group of volunteers and his Pawnee scouts were keeping up a vigilant search for hostile Indians in northeastern Wyoming, they trailed a band of Cheyenne who was heading north. The trail showed they were tracking a party of 40 horses and mules along with a travois. They caught up with them on the Powder River about 50 miles north of Fort Connor. Spying the troops, the Cheyenne thought the approaching Indians were friendly and made no hostile moves. However, the Pawnee suddenly charged in, surprising the Cheyenne, killing 27 Cheyenne, including Yellow Woman, who was the stepmother of George Bent. In the skirmish, North’s scouts lost four horses; but captured 18 horses and 17 mules, many with government brands showing they had been taken in the Battle of Platte Bridge Station. 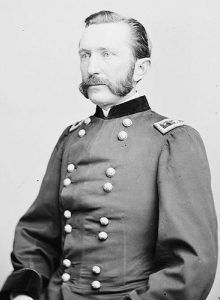 There, they scouted for a suitable site to build a new post and construction of Fort Connor (later Fort Reno) began. On August 22nd, Connor and his men, consisting of about 180 soldiers and 95 Pawnee scouts, continued north trailing along the east edge of the Bighorn Mountains to the Tongue River and moving downstream toward the rendezvous scheduled with the other parties of the expedition. The group encountered only minor skirmishing along the way. However, on August 28th, the Pawnee scouts brought word of an Arapaho village some 40 miles upstream at the head of the Tongue River. The column was then located on Prairie Dog Creek and Connor prepared to make an attack.

Following a night march, the U.S. Cavalry attacked Chief Black Bear’s Arapaho camp early in the morning of  August 29th while the Indians were packing to move on. Chief Black Bear and many of the warriors were away fighting the Crow along the Big Horn River, but Medicine Man and some older men, women, and children were still in camp. The warriors made a stand while their families scattered. The soldiers overran the camp, destroyed the village, and pushed the Indians 10 miles up Wolf Creek. The Indians fought a desperate rearguard action, protecting their families and only the use of artillery saved the soldiers from disaster.

Captain Henry E. Palmer of the 11th Kansas Cavalry said of the fight: “I was in the village in the midst of a hand to hand fight with warriors and their squaws, for many of the female portions of this band did as brave fighting as their savage lords. Unfortunately for the women and children, our men had no time to direct their aim…. squaws and children, as well as warriors, fell among the dead and wounded”.

Indian casualties included 54 warriors and several hundred ponies. Another 500-1000 horses were also seized and the soldiers captured 18 women and children, but later released them. Connor lost two soldiers and three scouts, with another seven soldiers were wounded. As the soldiers withdrew the Indians advanced, recapturing several of their ponies, and continued harassing the column for several days.

In the meantime, while Connor’s Left Column of the Powder River Expedition was having some moderate success, his Center and Right Columns led by Colonel Samuel Walker and Colonel Nelson Cole, respectively, were not. During their expeditions, they were troubled by mutinous soldiers, terrible weather, lack of quality guides, low supplies, and attacks on the Powder River in Montana.

Even though the expedition, in general, achieved inconclusive results, the army saw it as a tactical victory and it effectively ended the Powder River Expedition. The ability of the Arapaho to threaten the overland routes was reduced and emigrant travel became safer for a while. However, the attack caused the Arapaho to join forces with the Sioux and Cheyenne.

No physical evidence of the battle remains. The battleground is preserved in the Connor Battlefield State Historic Site about a mile south of  Ranchester, Wyoming. It is listed on the National Register of Historic Places.

Sawyers Fight (August 31, 1865) – On August 31, 1865, an expedition was surveying the route of the Bozeman Trail. The group, led by Colonel James Sawyer, was attacked by Arapaho Indians in retaliation for the attack on Black Bear’s village (Connor Battle.) The party was besieged for thirteen days until the surveyors were rescued by General Conner’s Powder River Expedition Force. The battlefield monument is alongside U.S. Hwy 14 about three miles from Dayton where the Bozeman Trail crosses the present highway.