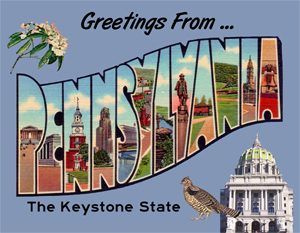 Officially called the Commonwealth of Pennsylvania, it is nicknamed the Keystone State because of its central location among the original 13 colonies. William Penn, a Quaker and the state’s founder, guaranteed religious freedom to everyone.

Penn established a government with two innovations much copied in the New World: the county commission and freedom of religious conviction.

There is much to see and do in Pennsylvania, which features 120 state parks, 18 National Parks, and 164 National Historic Landmarks. In the Allegheny National Forest in the northwestern corner of the state, visitors can enjoy snowmobiling, ATV trails, hunting, water sports, camping, fishing, and much more.

In Lancaster County, Amish still drive horse-drawn carriages and plow their fields much in the same way as their ancestors. See the Gettysburg National Military Park, where the Battle of Gettysburg was a turning point in the Civil War and inspired President Abraham Lincoln’s immortal “Gettysburg Address.” The Valley Forge National Park, which includes the site of the 1777-78 winter encampment of George Washington and the Continental Army, commemorates the sacrifices and perseverance of the Revolutionary War heroes. At Hershey, Pennsylvania, you can sample delicious candy at the world’s largest chocolate factory.

Enjoy your visit to the Keystone State.

Forts of the Keystone State

Fort Antes and the Big Runaway

The Johnstown Flood of 1889

Pontiac’s Rebellion Against the British

The Whiskey Rebellion of 1794

Pennsylvania’s official flag was adopted in 1907. The flag has a deep blue background. In the center are two harnessed draft horses surrounding a shield picturing a ship, a plow, and three sheaves of wheat. Above is a bald eagle. Below are a stalk of corn, an olive branch, and a draped red ribbon that reads, “Virtue, Liberty, and Independence.”

Pennsylvania, Pennsylvania,
Mighty is your name,
Steeped in glory and tradition,
Object of acclaim,
Where brave men fought the foe of freedom,
Tyranny decried,
‘Til the bell of independence filled the countryside.