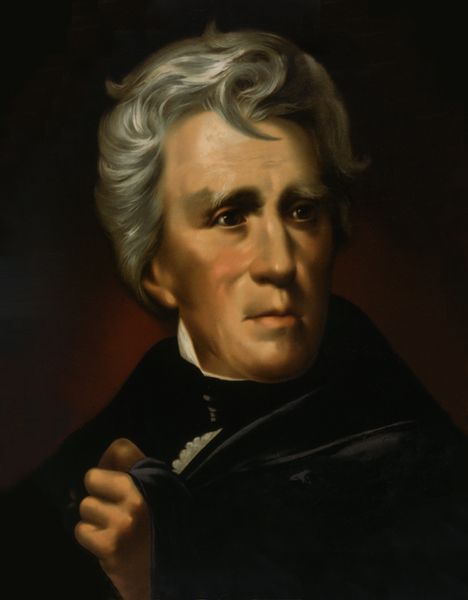 Without union, our independence and liberty would never have been achieved; without union, they never can be maintained. … The loss of liberty, of all good government, of peace, plenty, and happiness must inevitably follow a dissolution of the Union.  —Andrew Jackson, Second Inaugural Address, 1833

Andrew Jackson (1767-1845) – Military commander, politician, and seventh president of the United States, Jackson was a polarizing figure who dominated American politics in the 1820s and 1830s. More than any of his predecessors, Andrew Jackson was elected by popular vote, and as president, he sought to act as the direct representative of the common man.

He was born in a backwoods settlement in the Carolinas on March 15, 1767, to Scotch-Irish colonists Andrew and Elizabeth Hutchinson Jackson. However, his father died three weeks before he was born. He was the youngest of three boys, his older brother Hugh, born in 1763, and Robert, born in 1764.

He received a sporadic education as a youth and, at the age of 13, joined a local regiment as a courier in the American Revolution. His eldest brother, Hugh, died from heat exhaustion during the Battle of Stono Ferry on June 20, 1779. Jackson and his brother Robert were captured by the British and held as prisoners of war. During their captivity, they nearly starved to death, and when Jackson refused to clean the boots of a British officer, he was slashed in the head and left hand with a sword, leaving him scarred for life.

While imprisoned, both he and his brother, Robert, contracted smallpox, and their mother worked hard to have the two released. Let out of captivity on April 27, 1781; his brother died just a few days later. Assured that Andrew would recover, his mother volunteered as a nurse tending to prisoners of war on board two ships in Charleston harbor, where there had been an outbreak of cholera. In November, she died from the disease, leaving Andrew, an orphan with no immediate family.

In his late teens, he read law for about two years, and in 1787 was admitted to the North Carolina Bar.  In 1788, after moving to Nashville in the area that would become Tennessee, Jackson became an outstanding lawyer. Fiercely jealous of his honor, he engaged in brawls and was even involved in a dual; however, they both shot in the air. Around this time, he also met his future wife, Rachel Donelson Robards, who was in an unhappy marriage. 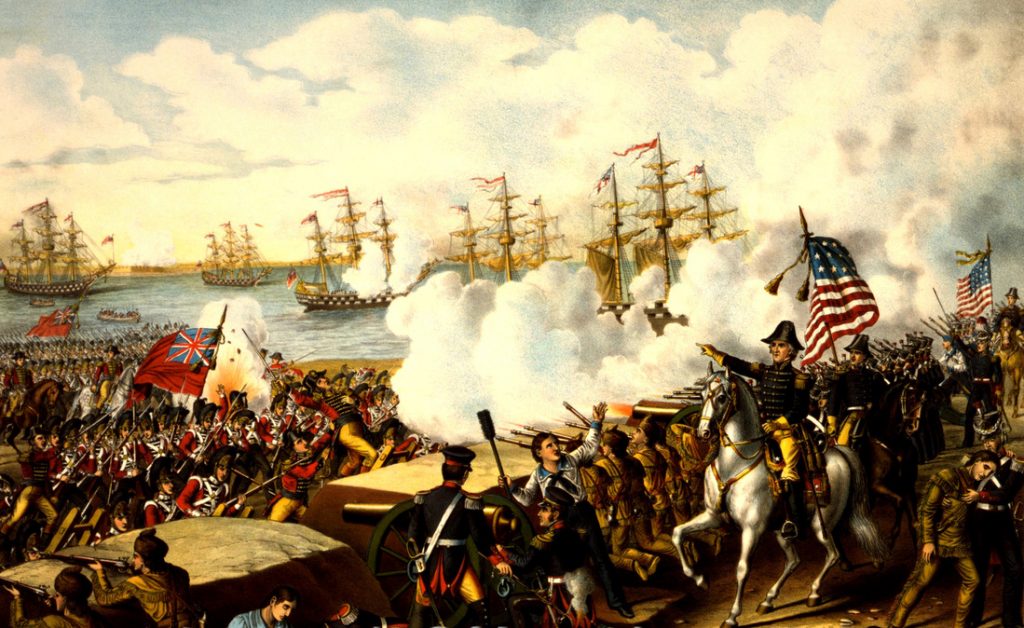 Jackson prospered sufficiently to buy slaves and to build a mansion, the Hermitage, near Nashville. He was the first man elected from Tennessee to the House of Representatives, and he served briefly in the Senate. A major general in the War of 1812, Jackson became a national hero when he defeated the British at New Orleans.

Renowned for his toughness, he was nicknamed “Old Hickory,” and in 1824, he ran for president, with several state political factions rallying around him, but lost to John Quincy Adams. However, by 1828 enough had joined with him to win numerous state elections, and he won against Adam’s bid for re-election.  During this election, Jackson’s opponents referred to him as a “jackass.” Jackson didn’t mind it and actually used the jackass (donkey) as a symbol for a while.  It would later become the recognized symbol of the Democratic Party long after Jackson’s presidency.

In his first Annual Message to Congress, Jackson recommended eliminating the Electoral College. He also tried to democratize Federal officeholding. Already state political machines were being built on patronage, and a New York Senator openly proclaimed “that to the victors belong the spoils …”

Jackson took a milder view. Decrying officeholders who seemed to enjoy life tenure, he believed Government duties could be “so plain and simple” that offices should rotate among deserving applicants.

Perhaps the most controversial aspect of Jackson’s presidency was his policy regarding American Indians, which involved ethnic cleansing and leading in the policy known as the Indian Removal Act. Jackson had been negotiating treaties and removal policies with Indian leaders for years before his election as president. In his December 8, 1829, First Annual Message to Congress, Jackson stated:

“This emigration should be voluntary, for it would be as cruel as unjust to compel the aborigines to abandon the graves of their fathers and seek a home in a distant land. But, they should be distinctly informed that if they remain within the limits of the States, they must be subject to their laws. In return for their obedience as individuals, they will, without doubt, be protected in the enjoyment of those possessions which they have improved by their industry.”

While frowned upon in the North, the Indian Removal Act was popular in the South, where population growth and the discovery of gold on Cherokee land in Georgia had increased pressure on tribal lands. The Cherokee fought the state of Georgia, taking its case to the Supreme Court, which ruled that Georgia could not impose its laws on Cherokee tribal lands in 1832.

In the meantime, Jackson used the Georgia crisis to pressure Cherokee leaders to sign a removal treaty. His representatives negotiated the Treaty of New Echota with John Ridge. 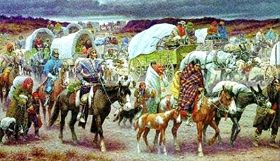 Ridge was not a recognized leader of the Cherokee Nation, and most Cherokee rejected the document as illegitimate. However, this was ignored, and the treaty was later enforced by Jackson’s successor, President Martin Van Buren, who ordered 7,000 armed troops to remove the Cherokee to Indian Territory. This abrupt and forced removal resulted in the deaths of over 4,000 Cherokee members on what became known as the “Trail of Tears.” During Jackson’s tenure as president, more than 45,000 American Indians were relocated to the West, and the administration bought about 100 million acres of Indian land for about $68 million.

As national politics polarized around Jackson and his opposition, two parties grew out of the old Republican Party — the Democratic-Republicans, or Democrats, adhering to Jackson, and the National Republicans, or Whigs, opposing him. Henry Clay, Daniel Webster, and other Whig leaders proclaimed themselves defenders of popular liberties against the usurpation of Jackson. Hostile cartoonists portrayed him as King Andrew I.

Behind their accusations lay the fact that Jackson, unlike previous presidents, did not defer to Congress in policy-making but used his power of the veto and his party leadership to assume command. The greatest party battle centered around the Second Bank of the United States, a private corporation but virtually a Government-sponsored monopoly. When Jackson appeared hostile toward it, the Bank threw its power against him.

Henry Clay and Daniel Webster, who had acted as attorneys for the Bank, led the fight for its re-charter in Congress. “The bank,” Jackson told Martin Van Buren, “is trying to kill me, but I will kill it!” Jackson, in vetoing the re-charter bill, charged the Bank with undue economic privilege. His views won approval from the American electorate; in 1832, he polled more than 56 percent of the popular vote and almost five times as many electoral votes as Clay.

In January of 1832, while the president was dining with friends at the White House, someone whispered to him that the Senate had rejected the nomination of Martin Van Buren as Minister to England. Jackson jumped to his feet and exclaimed, “By the Eternal! I’ll smash them!” So he did. His favorite, Van Buren, became Vice President and succeeded to the Presidency when “Old Hickory” retired to the Hermitage in Tennessee.

During his administration, Arkansas and Michigan were admitted to the Union. He survived an assassination attempt fending off his attacker with his cane. Jackson’s health deteriorated after he retired and was made worse by a bullet lodged near his heart received in a duel but never removed. He died at the Hermitage at the age of 77 on June 8, 1845, and was buried by his wife in a tomb on the Hermitage.

Today, the Hermitage is restored and open to the public.

His legacy is now seen as mixed, as a protector of popular democracy and individual liberty for American citizens, checkered by his support for slavery and Indian Removal. As he based his career in developing Tennessee, Jackson was the first president primarily associated with the American frontier. 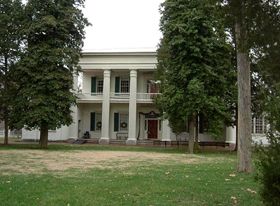