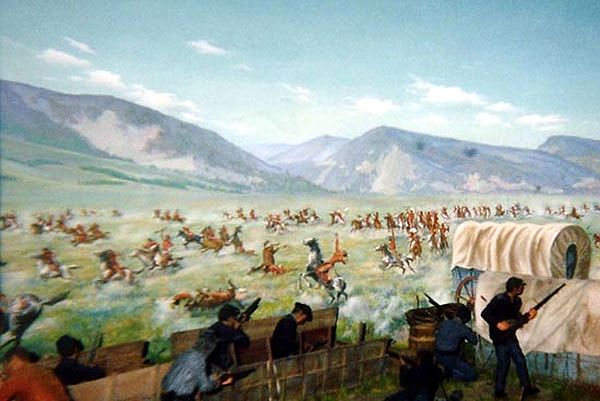 The Hayfield Fight occurred on August 1, 1867, three miles from Fort C.F. Smith in Montana, Territory. An engagement of Red Cloud’s War, it was fought between 21 soldiers of the U.S. Army, a hay-cutting crew of nine civilians, and several hundred Indian warriors, mostly Cheyenne and Arapaho, with some Lakota Sioux.

During this time, the Indians resisted the blazing and use of the Bozeman Trail, which ran through the Powder River Country occupied by the Lakota Sioux, Northern Cheyenne, Northern Arapaho, and Crow. Fort C.F. Smith was established in 1866 as one of three forts established to protect emigrants on the Bozeman Trail, which led from Fort Laramie, Wyoming, to the goldfields of Montana.

On the morning of August 1, 1867, the soldiers and civilians worked in a hayfield near the fort when a large group of Indians began to approach. The 30 soldiers and civilians took refuge in a corral as more than 700 warriors moved forward. Fortified behind a low log corral barrier, the Indians were surprised when the combined soldier/civilian force, armed with newly issued breech-loading Springfield Model 1866 rifles, were able to respond so quickly. The Indians then broke off the attack, which gave the defenders time to improve their defenses by digging trenches and filling wagon boxes with dirt to stop bullets. The Indians resumed the attack that afternoon, but the soldiers were firmly entrenched. After the soldiers and civilians had fought off the attack for six hours, the Indians finally retreated.

Of the soldiers/civilians, three were killed, and four were wound. Of the Indians, the number of casualties is unknown, but estimates were thought to have been 8 to 23 killed. 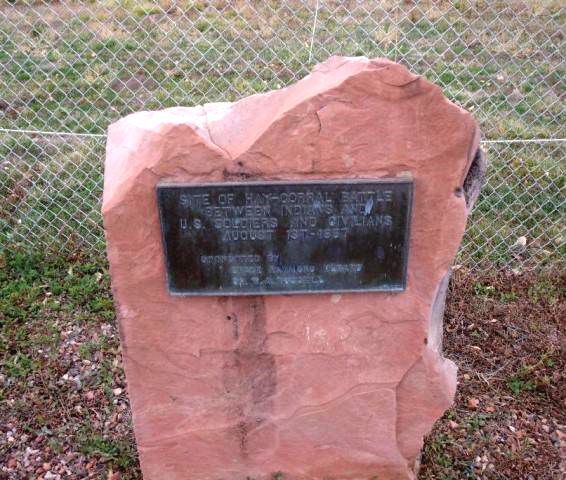 Afterward, Lieutenant Colonel Luther Bradley downplayed the fight in his official report and was criticized by several soldiers for the delay in sending help to the men trapped in the hayfield. While similar in circumstance and casualties to the Wagon Box Fight, which took place the next day near Fort Phil Kearny, Wyoming, this battle has not received as much attention by historians. In both cases, the soldiers’ defensive positions and new arms are considered critical to their holding off the larger forces of the Powder River warriors.

The Wagon Box Fight was the last major engagement of Red Cloud’s War, but the Indians continued to make raids on travelers and soldiers, telegraph lines, and on the Union Pacific Railway, which was under construction. The war was finally brought to an end after the Fort Laramie Treaty of 1868, which closed the Bozeman Trail and the forts.

The site of the battle is located about three miles northeast of Fort C. F. Smith, Montana. The site is on private land, marked by a monument and plaque.

Compiled by Kathy Weiser-Alexander, updated May 2021.