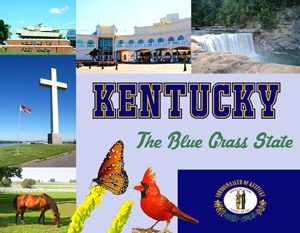 Officially called the Commonwealth of Kentucky, the “Bluegrass State” was originally part of Virginia. In 1792 Kentucky became the 15th state to join the Union. Kentucky’s name originates from an Iroquois word meaning “meadowlands.” Once inhabited by varying cultures of Native Americans from as far back as 1000 BC, the Indians roamed the region, particularly along the waterways and in areas of game. When European and colonial explorers and settlers entered Kentucky in greater numbers in the mid-18th century, warfare broke out because the American Indians considered the settlers encroaching on their traditional hunting grounds.

Kentucky is a land with diverse environments and abundant resources, including the world’s longest cave system, Mammoth Cave National Park; the greatest length of navigable waterways and streams in the contiguous United States; and the two largest man-made lakes east of the Mississippi River. It is also home to the largest free-ranging elk herd east of Montana and the nation’s most productive coalfield.

Placed on a navy blue field are the seal and words “Commonwealth of Kentucky.” The two people on the seal, a pioneer and a statesman, represent all the people. They are acting out the meaning of Kentucky’s motto: “United We Stand; Divided We Fall.” Sprays of goldenrod extend in a half circle around the picture. 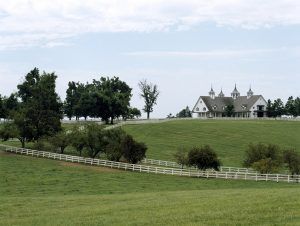 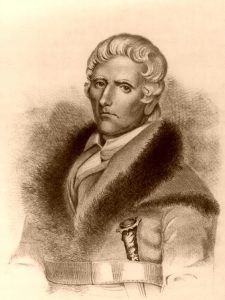