“Look at me. I was a warrior on this land where the sun rises, now I come from where the sun sets. Whose voice was first surrounded on this land – the red people with bows and arrows. The Great Father says he is good and kind to us. I can’t see it… – 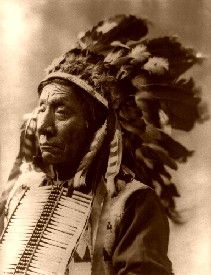 Every age, every race, has its leaders and heroes. There were over sixty distinct tribes of Indians on this continent, each of which boasted its notable men. The names and deeds of some of these men will live in American history, yet in the true sense, they are unknown, because misunderstood. I should like to present some of the greatest chiefs of modern times in the light of the native character and ideals, believing that the American people will gladly do them tardy justice.

It is a matter of history that the Sioux nation, to which I belong, was originally friendly to the Caucasian peoples which it met in succession-first, to the south the Spaniards; then the French, on the Mississippi River and along the Great Lakes; later the English, and finally the Americans. This powerful tribe then roamed over the whole extent of the Mississippi valley, between that river and the Rockies. Their usages and government united the various bands more closely than was the case with many of the neighboring tribes.

During the early part of the 19th century, chiefs such as Wabasha, Redwing, and Little Six among the Eastern Sioux, Conquering Bear, Man-Afraid-of-His-Horse, and Hump of the western bands, were the last of the old type. After these, we have a coterie of new leaders, products of the new conditions brought about by close contact with the conquering race.

This distinction must be borne in mind — that while the early chiefs were spokesmen and leaders in the simplest sense, possessing no real authority, those who headed their tribes during the transition period were more or less rulers and more or less politicians. It is a singular fact that many of the “chiefs”, well known as such to the American public, were not chiefs at all according to the accepted usages of their tribesmen. Their prominence was simply the result of an abnormal situation, in which representatives of the United States Government made use of them for a definite purpose. In a few cases, where a chief met with a violent death, some ambitious man has taken advantage of the confusion to thrust himself upon the tribe and, perhaps with outside help, has succeeded in usurping the leadership. 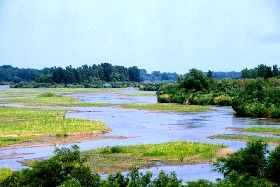 Red Cloud was born about 1820 near the forks of the Platte River. He was one of a family of nine children whose father, an able and respected warrior, reared his son under the old Spartan regime. The young Red Cloud is said to have been a fine horseman, able to swim across the Missouri and Yellowstone Rivers, of high bearing and unquestionable courage, yet invariably gentle and courteous in everyday life. This last trait, together with a singularly musical and agreeable voice, has always been characteristic of the man.

When he was about six years old, his father gave him a spirited colt, and said to him: “My son, when you are able to sit quietly upon the back of this colt without saddle or bridle, I shall be glad, for the boy who can win a wild creature and learn to use it, will as a man, be able to win and rule men.”

The little fellow, instead of going for advice and help to his grandfather, as most Indian boys would have done, began quietly to practice throwing the lariat. In a little while, he was able to lasso the colt. He was dragged off his feet at once but hung on, and finally managed to picket him near the teepee.

When the big boys drove the herd of ponies to water, he drove his colt with the rest. Presently the pony became used to him and allowed himself to be handled. The boy began to ride him bareback; he was thrown many times but persisted until he could ride without even a lariat, sitting with arms folded and guiding the animal by the movements of his body. From that time on he told me that he broke all his own ponies, and before long his father’s as well. The old men, his contemporaries, have often related to me how Red Cloud was always successful in the hunt because his horses were so well broken. 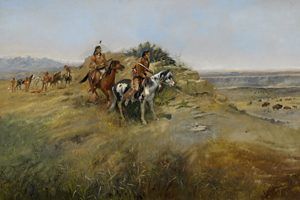 At the age of nine, he began to ride his father’s pack pony on the buffalo hunt. He was 12 years old, he told me, when he was first permitted to take part in the chase, and found to his great mortification that none of his arrows penetrated more than a few inches. Excited to recklessness, he whipped his horse nearer the fleeing buffalo, and before his father knew what he was about, he had seized one of the protruding arrows and tried to push it deeper. The furious animal tossed his massive head sidewise, and boy and horse were whirled into the air.

Fortunately, the boy was thrown on the farther side of his pony, which received the full force of the second attack. The thundering hoofs of the stampeded herd soon passed them by, but the wounded and maddened buffalo refused to move, and some critical moments passed before Red Cloud’s father succeeded in attracting its attention so that the boy might spring to his feet and run for his life.

I once asked Red Cloud if he could recall having ever been afraid, and in reply, he told me this story. He was about sixteen years old and had already been once or twice upon the warpath when one fall his people were hunting in the Big Horn country, where they might expect trouble at any moment with the hostile Crow or Shoshone. Red Cloud had followed a single buffalo bull into the Badlands and was out of sight and hearing of his companions. When he had brought down his game, he noted carefully every feature of his surroundings so that he might at once detect anything unusual, and tied his horse with a long lariat to the horn of the dead bison, while skinning and cutting up the meat so as to pack it to camp. Every few minutes he paused in his work to scrutinize the landscape, for he had a feeling that danger was not far off.

Suddenly, almost over his head, as it seemed, he heard a tremendous war-whoop, and glancing sidewise, thought he beheld the charge of an overwhelming number of warriors. He tried desperately to give the usual undaunted war whoop in reply, but instead a yell of terror burst from his lips, his legs gave way under him, and he fell in a heap. When he realized, the next instant, that the war-whoop was merely the sudden loud whinnying of his own horse, and the charging army a band of fleeing elk, he was so ashamed of himself that he never forgot the incident, although up to that time he had never mentioned it. His subsequent career would indicate that the lesson was well learned.

The future leader was still a very young man when he joined a war party against the Utes. Having pushed eagerly forward on the trail, he found himself far in advance of his companions as night came on, and at the same time rain began to fall heavily. Among the scattered scrub pines, the lone warrior found a natural cave, and after a hasty examination, he decided to shelter there for the night.

Scarcely had he rolled himself in his blanket when he heard a slight rustling at the entrance as if some creature were preparing to share his retreat. It was pitch dark. He could see nothing but judged that it must be either a man or a grizzly. There was not room to draw a bow. It must be between knife and knife, or between knife and claws, he said to himself.

The intruder made no search but quietly lay down in the opposite corner of the cave. Red Cloud remained perfectly still, scarcely breathing, his hand upon his knife. Hour after hour he lay broad awake, while many thoughts passed through his brain. Suddenly, without warning, he sneezed, and instantly a strong man sprang to a sitting posture opposite. The first gray of morning was creeping into their rocky den, and behold, a Ute hunter sat before him.

Desperate as the situation appeared, it was not without a grim humor. Neither could afford to take his eyes from the others; the tension was great, till at last a smile wavered over the expressionless face of the Ute. Red Cloud answered the smile, and in that instant, a treaty of peace was born between them.

“Put your knife in its sheath. I shall do so also, and we will smoke together,” signed Red Cloud. The other assented gladly, and they ratified thus the truce which assured to each a safe return to his friends. Having finished their smoke, they shook hands and separated. Neither had given the other any information. Red Cloud returned to his party and told his story, adding that he had divulged nothing and had nothing to report. Some were inclined to censure him for not fighting, but he was sustained by a majority of the warriors, who commended his self-restraint. In a day or two, they discovered the main camp of the enemy and fought a remarkable battle, in which Red Cloud especially distinguished himself.