The Kansas Plains by Kathy Alexander.

Kansas, located in the center of the nation, has a long history associated with America’s Westward Expansion. When Kansas Territory was created in 1854, it became the center of a struggle between abolitionists and pro-slavery advocates leading to what was known as Bleeding Kansas.

At the same time, many people were moving westward, and major trails passed through the state, including the Santa Fe Trail, the Oregon Trail, and the CaliforniaTrail. Later, when the railroad pushed westward, several cowtowns boomed as Texas ranchers pushed their cattle to the railroad. These events have given the Sunflower State a wealth of interesting history and dozens of significant historic sites.

While some may say that Kansas is “flat as a pancake,” and maybe some parts of it are, it’s also just “flat great!”

Interestingly, Kansas has 12 designated scenic byways, three of them named for the hills in which they are located: Flint Hills, Glacial Hills, and Gypsum Hills.

To truly see and appreciate the state, one must venture off of I-70 and meander down a few back roads where they might see some interesting geographical features in places called Castle Rock and Twin Butte in Western Kansas. Or, in northeast Kansas, one can almost taste the adventure in old riverfront cities such as Atchison and White Cloud.

Kansas is rich in history, with such characters as the lawless John Brown during the Civil War, lawman Wyatt Earp in Dodge City, and the Dalton Gang, who wreaked havoc on the state and were finally shot and killed in Coffeyville.

This is a just a little of what the state has to offer. You will also find great people in the State of Kansas! Enjoy your travels in Kansas, and welcome to the Legends Of “Ahs!”

P.S.  I can say Kansas is flat (at least in some places) because I grew up there.

Treasure Hunting on the Kansas Prairie

Heroines of the Plains

Monument Rocks – Pyramids of the Plains

You Know You’re In Kansas When…

State Flag – On a navy blue field is a sunflower, the state flower. Also, the state seal and the word “Kansas.” In the picture of the state seal are thirty-four stars representing the order of statehood. Above the stars is the motto “To the Stars Through Difficulties.” On the seal, a sunrise overshadows a farmer plowing a field near his log cabin, a steamboat sailing the Kansas River, a wagon train heading west, and Native Americans hunting bison. 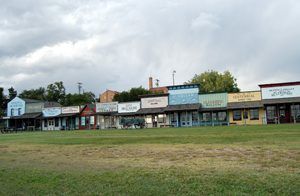 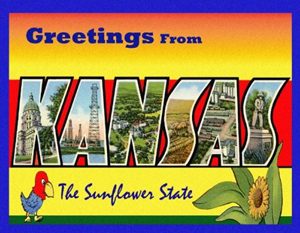 Legends of Kansas, where the history of the Sunflower State is explored in-depth.