After the extensive surrenders in 1877 of the hostile Northern Cheyenne, in the Departments of Dakota and the Platte, a number were sent under guard to the Cheyenne and Arapaho Agency, at Fort Reno, Indian Territory, on August 8, 1877. After that date, other small parties surrendered, and some died so that on July 1, 1878, the number of Northern Cheyenne at Fort Reno amounted to more than 940. An attempt had been made by General Pope, commanding the Department of the Missouri, to disarm and dismount these Indians, to place them on the same footing with the Southern Cheyenne. Still, as it was found this could not be done without violation of their surrender conditions, they were permitted to retain their arms and ponies.

Dissatisfied with life at their new agency, they determined to break away, move north, and rejoin their friends in the country where they formerly lived. Their intention to escape had long been suspected. The troops consequently watched their movements, but by abandoning their lodges, which they left standing, about 89 warriors and slightly less than 250 women and children escaped from the agency on September 9, 1877. 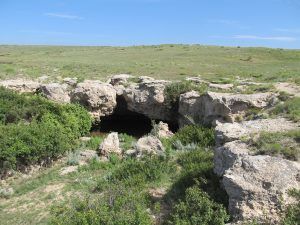 Although troops were dispatched from several posts to intercept and return them to the agency, the Indians eluded their pursuers and continued north raiding settlements for stock and committing other depredations. On September 21st, a minor skirmish took place between the Indians and Army troops assisted by citizens. Six days later, Colonel Lewis’ command overtook the Cheyenne on “Punished Woman’s Fork” of the Smoky Hill River. The Indians were found very strongly entrenched and waiting for the troops. Colonel Lewis attacked them at once and was mortally wounded while leading the assault. Three enlisted men were wounded in the clash, one Indian killed, 62 head of stock were captured.

Despite all precautions, the Cheyenne managed to escape and continue north. Two Cheyenne, who had been taken prisoner by cowboys told authorities the fugitives had intended to reach the Cheyenne, supposed to be at Fort Keogh, Montana, where, if permitted to stay, they would surrender, otherwise they would try to join Sitting Bull, who remained in Canada. The prisoners also said that the escaping Cheyenne had lost 15 killed in the various fights after they escaped from Fort Reno.

On October 23rd, two troops of the 3d Cavalry captured 149 of the Cheyenne and 140 head of stock. Dull Knife, Old Crow, and Wild Hog were among the prisoners. Their ponies were taken away, together with such arms as could be found, but the prisoners said they would die rather than be taken back to Indian Territory. Little Wolf and some of his followers escaped and, in January 1879, additional members of the tribe escaped to join Little Wolf after a skirmish with troops near Fort Robinson, Nebraska.

Some of the escaping Cheyenne strongly positioned on some cliffs were intercepted, but again they escaped. However, two days later, they were again located near the telegraph line from Fort Robinson to Hat Creek, where they were entrenched in a gully. Refusing to surrender, they were immediately attacked, and the entire party was either killed or captured. Dull Knife, their leader was among those killed.

On March 25th, Little Wolf and his band were overtaken near Box Elder Creek by force made up of two Cavalry troops, a detachment of Infantry, a field gun, and some Indian scouts. The Indians were persuaded to surrender without fighting and gave up all their arms and about 250 ponies and marched with the troops to Fort Keogh. The band numbered 33 men, 43 women, and 38 children.