Industrial Revolution in the United States.

The Battle of Athens: An Obscure American Revolution

The Fatal Flight of United Airlines 629

The Good Old Days, produced by Kathy Alexander/Legends of America.

Migrant Mother during the Depression-era 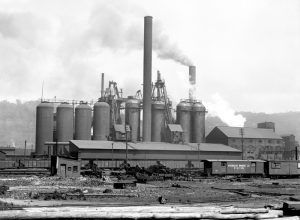 Moving out of the days of the Wild West, the 20th century in United States history moved beyond a gunfighter, mining, homesteading, and outlaw mentality to becoming an industrialized nation and onwards to a world superpower. Though the rough and ready days of the Old West were pretty much over, the nation was filled with a new generation of pioneers who sought to industrialize and civilize the nation.

With these new ideals came child labor laws, environmental concerns, and Prohibition. Known as the “Noble Experiment,” Prohibition banned the sale, manufacture, and transportation of alcohol for consumption from 1919 to 1933. This led to a different “outlaw” mentality, spawning a new generation of desperados who thrived from the lucrative business of bootlegging and liquor sales. The American public, not to be deprived of their “rights,” fought back, especially the many gangsters who profited greatly during these times with liquor sales and gambling, prostitution, drugs, and other decadent activities.

More trauma occurred with the expansion of monopolies and trusts, and in 1914, World War I began. In a global military conflict that embroiled most of the world’s great powers, more than 70 million soldiers were mobilized in one of the largest wars in history. In the end, more than 15 million people were killed, making World War I one of the deadliest conflicts in history. It finally ended four years later, in 1918.

But, for America and the rest of the world, hard times were not finished. Soon, the Great Depression settled upon the nation and the rest of the world. It was the largest and most severe economic Depression in the 20th century. Originating in the United States, most historians use a starting date when the stock market crashed on October 29, 1929, known as Black Tuesday.

The Depression had devastating effects on all walks of life. International trade plunged, as did personal income, tax revenue, prices, and profits. Heavy industry suffered greatly, farming and rural areas dramatically declined as crop prices fell by approximately 60 percent, and tens of thousands of jobs were lost. Devastated and starving, the Depression created yet another era of outlaws that once again created violence in all areas of the nation. The U.S. finally began to recover in the spring of 1933, encouraged by President Franklin Roosevelt’s administration policies, such as the National Industrial Recovery Act.

Later years in the 20th century continued to see trauma in World War II, which began in 1939 and ended in 1945, followed by the Cold War, a tense militaristic standoff between the United States and the Soviet Union, the two remaining superpowers after World War II. In 1950, the Korean War began, and from 1959 the long, drawn-out Vietnam War lasted until April 1975.

The 20th Century was also known for the Space Race, the Civil Rights Movement, and the beginning of the Gulf War.