The Iroquois or Haudenosaunee were a powerful northeast Native American confederacy who lived primarily in Ontario, Canada and upstate New York for well over 4,000 years. Technically, “Iroquois” refers to a language rather than a particular tribe, but, early on, it began to refer to a “nation” of Indians made up of five tribes, including the Seneca, Onondaga, Oneida, Cayuga, and Mohawk.

Other tribes of Iroquoian stock that were not part of the Confederacy were the Huron, Tionontati, the Neutral Nation of Ontario; the Erie and Conestoga in Ohio and Pennsylvania, and the Meherrin, Nottoway, Tuscarora, and Cherokee, of Virginia and Carolina.

The name “Iroquois” is a French derivative of disputed origin and meaning, but may possibly come from the Algonquin word Irinakhow, meaning “real snakes.” The Algonquin tribes denoted hostile tribes as snakes. They called themselves Haudenosaunee, which means “people of the longhouse.”

After Europeans arrived, they were known during the colonial years to the French as the Iroquois League, and later as the Iroquois Confederacy, and to the English as the Five Nations. After 1722, they accepted the Tuscarora people from the Southeast into their confederacy and became known as the Six Nations.

History varies as to when the Iroquois League was established. Some historians believe the tribes came together as early as 1142 while others contend it was formed in about 1450. According to oral histories, the tribes, who had been fighting, raiding and feuding with one another, as well as other tribes, were brought together through the efforts of two men and one woman. They were Dekanawida, sometimes known as the Great Peacemaker, Hiawatha, and Jigonhsasee, known as the Mother of Nations. 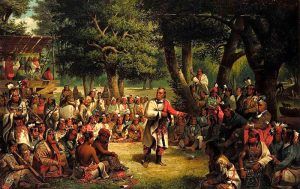 They subsequently created a highly egalitarian society and united to form a powerful nation. They designed an elaborate political system, which included a two-house legislature. The chiefs from the Seneca and Mohawk tribes met in one house while the Oneida and Cayuga met in the other. The Onondaga broke ties and had the power to veto decisions made by the others. Early on there was an unwritten constitution that described these proceedings. Such a complex political arrangement was unknown in Europe at that time. In general, it might be compared to our own system of independent state and federal jurisdiction, and in fact, the Iroquois recommended their system as a model at the outbreak of the American Revolution. 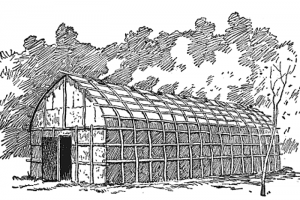 The Iroquois lived in longhouses, some of which extended more than the length of a football field. However, most of the structures ranged from 50 to 100 feet in length and from 15 to 20 feet in width. The interior was divided into equal size compartments which opened on a central passageway. Each compartment sheltered one family so that as many as 20 families might live under one roof. At the ends of the building were separate rooms for storage and guest purposes. The occupants of the house were usually closely related by clan kinship. In the principal towns, the houses were compactly and regularly arranged and enclosed within strong palisades.

Surrounding the villages were extensive cornfields and orchards. The tribes also cultivated squash, beans, and tobacco, and the women gathered wild roots, greens, berries, and nuts. The men hunted for game and fished. Their early weapons were the bow, knife, stone, and wooden clubs, and stone-headed lances. They used shields made of rawhide or wickerwork.

Women held a special role within the tribes, believed to be linked to the earth’s power to create life. The tribes were matrilineal whereby families moved into the longhouse of the mother and family lineage was traced from her.

Each tribe had a women’s council which took the initiative in all matters of public importance, including the nomination of members of the chief’s council, which was made up of both hereditary chiefs and additional members chosen for their abilities. Fifty hereditary chiefs from all five tribes constituted the league council, which ratified the nominations made by the women’s council.

No alien could become a member of the tribe except by formal adoption into a clan, which was decided by the women of the clan. The fate of captives for life or death was decided by the women. As the cultivators of the ground, women determined how the food would be distributed and held jurisdiction of the territorial domain. As mothers of the warriors, they decided questions of war and peace.

In the summer, the people went mostly naked, with the men wearing only a decorated breechcloth with a belt worn around the waist. The basic item of women’s clothing was a skirt. In the winter, they wore fringed buckskins, leggings, moccasins, and a robe or blanket. Clothing was adorned with moose-hair embroidery and decorated pouches for carrying personal items completed the costumes. The men carefully removed all facial hair and wore their hair in a Mohawk style. Tattoos were common for both sexes.

Unlike most eastern Indians, the Iroquois were monogamists, but divorce was easy and frequent. The children always remained with the mother. 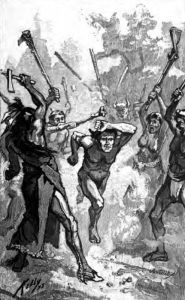 The Iroquois were well known for their incessant warfare, their merciless treatment of prisoners of war, and their training of males to be immune to pain. They regularly practiced “Mourning War” raids to avenge warriors killed in a previous battle. These were conducted to provide an outlet for grief and mourning. The purpose was to abduct members of rival tribes as compensation. Upon their arrival back to camp, the captives were stripped, bound at the hands and feet, and forced to walk a gauntlet of tribe members who repeatedly struck them with clubs, torches, and knives. Occasionally, the matriarch of the clan demanded that these captives be immediately killed in vengeance. However, this was not normally the case.

The tribal council then assigned each prisoner to a family that had lost relatives. In general, women, children, and skilled or especially attractive men were adopted into the family. However, these adopted captives were never accounted as equal members of the Confederacy. Other captives, especially warriors, were condemned to die through ritual sacrifice. These men were tortured in a lengthy, highly ritualized ceremony until they died. Other tribes said the Iroquois concluded the ceremony by cooking and eating his remains.

They Iroquois were first encountered by Europeans in 1535 when French explorer Jacques Cartier sailed up the St. Lawrence River.

The French had established a presence in Canada for over 50 years before they next met the Iroquois. During that time, the Iroquois acquired European trade goods through raids on other Indian tribes. The Iroquois quickly found the metal tools far superior to their implements of stone, bone, shell, and wood. At that time, woven cloth began to replace the animal skins usually used for clothing materials.

These recurring raids prompted the French to help their Indian allies attack the Iroquois in 1609. At that time, Samuel de Champlain, a French trader, and explorer, was working to form better relations with the local native tribes, including the Huron and the Algonquin who lived in the area of the St. Lawrence River. These tribes demanded that Champlain help them in their war against the Iroquois, who lived further south. In the summer of 1609, Champlain set off with nine French soldiers and 300 natives to explore the Richelieu River. After having no encounters with the Iroquois, many of the men headed back, leaving Champlain with only two Frenchmen and 60 natives. 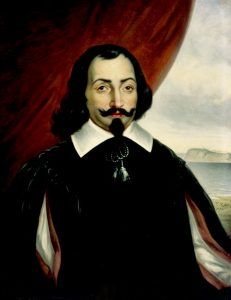 On July 29, along the southern shores of Lake Champlain, New York, they came upon a group of Iroquois and a battle began the next day. When 200 warriors of the tribe advanced on Champlain’s position, Champlain fired his long gun, killing two of them with a single shot, and one of his men killed the third. Having never seen the power of firearms, the Indians hastily retreated. They were followed by Champlain and his men, who killed 13 more warriors. This action set the tone for French-Iroquois relations which would result in outright hostility for centuries. Afterward, the tribe made aggressive efforts to buy guns from Dutch traders

More and more Europeans would then make their way to the area, at which time the Confederacy was based in Ontario and Quebec Canada, and New York and Pennsylvania in the United States. Though the Europeans provided the Indians with better tools, they were disastrous for the indigenous people, as they brought diseases such as smallpox, measles, influenza, and lung infections, for which they had developed no immunity and knew no cures.

1 thought on “The Powerful Iroquois Confederacy of the Northeast”