Though Wisconsin is nicknamed the “Badger State” it’s not due to a proliferation of short-legged weasel-like animals; but, rather, because its earliest white settlers were nomadic lead miners who burrowed into the hills for shelter rather than waste their time and resources on more permanent structures.

Long before these mining “badgers” came to Wisconsin, it had long been inhabited for over 12,000 years. The earliest inhabitants, living during the glacier age, hunted now-extinct ice age animals. When the ice age ended, the indigenous peoples survived by hunting, fishing, and gathering food from wild plants followed by those known as the “Mound Builders”. By the time Europeans arrived in the region, it was occupied by tribes such as the Ioway, Menominee Ojibwa, Sauk, Fox, Kickapoo, and Pottawatomie.

The first European to visit what is now Wisconsin is thought to have been the French explorer Jean Nicolet, who canoed west from Georgian Bay through the Great Lakes in 1634, and came ashore near present-day Green Bay. Wisconsin became a U.S. territory following the American Revolution and soon after began attracting settlers looking for work in its mining, lumber and dairy industries. as more and more settlers made their homes in the area, Wisconsin became the 30th state in 1848. Prior to and during the Civil War, Wisconsin was an important stop on the Underground Railroad, with many slaves passing through the state on their way to freedom in Canada.

Today, Wisconsin is known for an economy primarily based in agriculture, manufacturing, and tourism. Situated on two Great Lakes — Lake Superior and Lake Michigan, and its interior filled with a large number of lakes and rivers, water recreation is very popular. Its varied landscape also makes it a popular destination for all types of outdoor recreation from skiing, ice fishing and snowmobiling in the winter, and hunting and fishing throughout the year. Some of the most popular travel destinations include Wisconsin Dells, known as The Waterpark Capital of the World; The Apostle Islands National Lakeshore, which includes 21 wilderness islands in Lake Superior; the Harley-Davidson Museum in Milwaukee, Door County, which provides visitors some of the most breathtaking natural beauty in the world with 300 miles of picturesque shoreline, five scenic state parks, and ten historic lighthouses; Circus World in Baraboo, Old World Wisconsin in Eagle, and many more.

Wisconsin leads the nation in dairy production and is known for the quality of its cheddar cheese, so much so that residents sometimes refer to themselves as “cheeseheads.”

Wisconsin’s flag was originally designed in 1863 when regiments from Wisconsin wanted a flag for battlefield use. However, it wasn’t until 1913 that state statutes specified the design of the state flag. The state coat of arms sits in the middle of a dark blue field. The state coat of arms represents the main industries of Wisconsin — agriculture, mining, manufacturing, and navigation. The cornucopia and pile of lead represent farm products and minerals. The flag law was amended in 1979 to include the name of the state and the date of statehood. 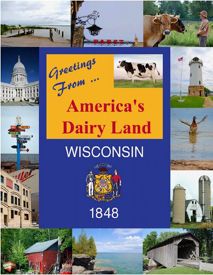 The Peshtigo Firestorm of 1871

The Beast of Bray Road

When Wisconsin Was Discovered

When in Rome… Wisconsin

Iowa to Wisconsin Via Field of Dreams 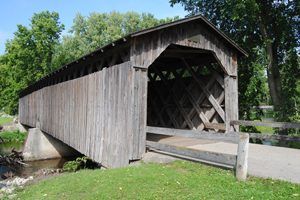