“The American Indian is of the soil, whether it be the region of forests, plains, pueblos, or mesas. He fits into the landscape, for the hand that fashioned the continent also fashioned the man for his surroundings. He once grew as naturally as the wild sunflowers, he belongs just as the buffalo belonged.”

The history of the American West is obviously never complete without the tales of the many Americans who first lived on these vast lands.

Here, you’ll find summaries of many of the chiefs, heroes, warriors, and medicine men that history records as significant in the westward expansion of the United States.

Though there were literally thousands of men and women that could be mentioned, this ever-growing list of individuals begins with those most famous. 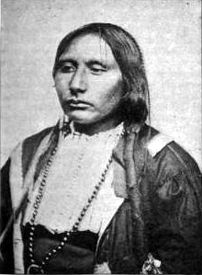 American Horse (1800-1876) – American Horse, an Oglala Sioux chief, was one of the principal war chiefs during the Battle of the Little Bighorn. He was killed by General George Crook’s troops in 1876.

Big Elk (1765-1846) – Chief of the Omaha tribe. Known as Ongpatonga to the Omaha tribe, Big Elk earned a reputation as a warrior when he was still very young, primarily in skirmishes against the Pawnee. When Omaha Chief Washinggusaba (Black Bird), who was known as a tyrant, died in 1800, Big Elk, who had gained a reputation for fairness in making decisions, became the principal chief. Afterward, the Euro-Americans began to pass through Omaha Territory. In 1821 and 1837, he traveled to Washington, D.C. to negotiate treaties and became known as a spellbinding orator. He continued to lead the Omaha Indians until he died of fever in 1846. He was buried in Bellevue, Nebraska, at a site called Elk Hill, but to the Omaha, called Onpontonga Xiathon, meaning, “the Place Where Big Elk Is Buried.”

Big Foot, aka: Sithanka, Spotted Elk (1826?-1890) – A Hunkpapa Sioux, Big Foot was the chief of the Cheyenne River Reservation. He was killed on December 29, 1890, along with almost 300 other members of his tribe, at the Wounded Knee Massacre.

Big Mush (??-1839) – Fought in the Cherokee War in Texas and was killed in the Battle of the Neches on July 16, 1839.  Though little is known of Chief Big Mush or Gatun-wa-’li to his people, he was known to exercise authority in civil matters during the time that some Cherokee bands made their home in northeast Texas. Thought to have lived in the northwestern part of Rusk County, he was closely associated with Chief Bowles in 1827 and was one of the signers in the treaty made with General Sam Houston to assign the lands to the Cherokee; however the Texas Senate refused to ratify the treaty which soon led to the Cherokee War. Big Mush was killed in the Battle of the Neches, along with Chief Bowles on July 16, 1839

Black Elk (1863-1950) – Known as Hehaka Sapa to his people, Black Elk was a famous Lakota holy man. He participated in the Battle of the Little Bighorn when he was just 12 years old. In 1886 Black Elk joined Buffalo Bill Cody’s Wild West Show and toured eastern cities and even Europe. In 1890, he was wounded in the massacre that occurred in Wounded Knee in 1890. Living on the reservation, he was baptized as a Catholic and took the name, Nicholas Black Elk. Serve as a spiritual leader among his people, he saw no contradiction in what he found valid in both his tribal traditions and those of Christianity. He then began to travel helping to convert Arapaho, Winnebago, Omaha, and others to Christianity. In later years he combined his missionary work with showmanship at various tourist attractions in  South Dakota, using his reputation as a Lakota holy man to draw visitors. He died in August 1950. 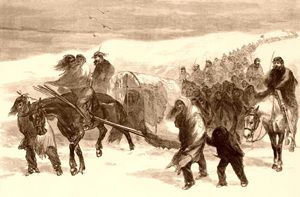 Black Kettle (1803-68) – Peaceful leader of the Southern Cheyenne tribe. Killed by General George Armstrong Custer and his troops at the Battle of Washita.

Edward “Ned” Wilkerson Bushyhead (1832-1907) – Bushyhead was a Cherokee miner, publisher, and lawman who traveled on the Cherokee Trail of Tears to Oklahoma and later became the Chief of Police in San Diego, California.

Cochise (18??-1874) – Apache Chief and one of the last holdouts in resisting white settlement.

Chief Levi Colbert – (1759-1834) – Also known as Itawamba in Chickasaw, Colbert was a leader and chief of the Chickasaw in Alabama and Mississippi. He and his brother, George Colbert, were prominent interpreters and negotiators with Andrew Jackson’s appointed negotiators related to Indian Removal.

Natawista Culbertson (1825?-1895) – Natawista, the daughter of a Blackfoot chief, married fur trader Alexander Culbertson and worked as a diplomat, a hostess, and an interpreter.