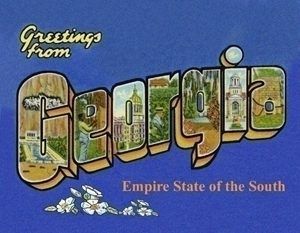 Established in 1732, Georgia’s state motto is “Wisdom, Justice, Moderation.”  Nicknamed the “Empire State of the South” and the “Peach State,” Georgia was the last of the original 13 colonies.

Named after King George II of Great Britain, Georgia became the fourth state in the Union on January 2, 1788. It would be the scene of major battles during the Civil War as it was one of the original seven states to secede from the Union and the last to be restored in 1870.

There’s a lot to see and do in this beautiful state, which borders the Atlantic Ocean, and plenty of history to tell. 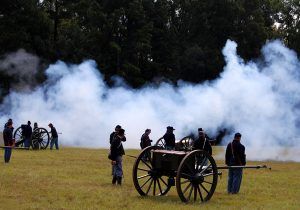 Re-enactors fire cannons during the 149th Anniversary of the Battle of Chickamauga, Georgia. Photo by Dave Alexander.

Andersonville Prison of the Civil War

Altamaha-ha – Serpent of the Altamaha River

Haunted Historic Sites in Savannah You Must Visit

Sherman’s Famous March to the Sea

A Tour Along the Georgia Coast

Georgia Flag – The Georgia flag has three red and white stripes and the state coat of arms on a blue field in the upper left corner. The 13 stars surrounding the seal denotes Georgia’s position as one of the original 13 colonies. On the seal, three pillars supporting an arch represent the three branches of government; legislative, judicial, and executive. A man with a sword drawn is defending the Constitution, whose principles are wisdom, justice, and moderation. The date 1776 represents the signing of the Declaration of Independence.