By Theodore Roosevelt in 1893 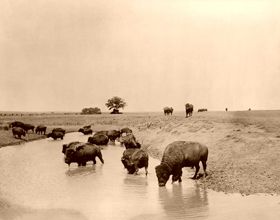 When we became a nation in 1776, the buffalo, the first animals to vanish when the wilderness is settled, roved to the crests of the mountains which mark the western boundaries of Pennsylvania, Virginia, and the Carolinas. They were plentiful in what are now the States of Ohio, Kentucky, and Tennessee. But by the beginning of the present century they had been driven beyond the Mississippi River; and for the next 80 years they formed one of the most distinctive and characteristic features of existence on the great plains. Their numbers were countless — incredible. In vast herds of hundreds of thousands of individuals, they roamed from the Saskatchewan River to the Rio Grande River and westward to the Rocky Mountains.

They furnished all the means of livelihood to the tribes of Horse Indians, and to the curious population of French Metis, or Half-breeds, on the Red River, as well as to those dauntless and archtypical wanderers, the white hunters and trappers.

Their numbers slowly diminished, but the decrease was very gradual until after the Civil War. They were not destroyed by the settlers, but by the railways and the skin hunters. 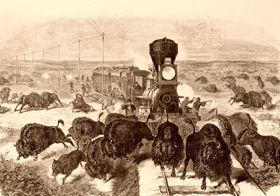 After the ending of the Civil War, the work of constructing trans-continental railway lines was pushed forward with the utmost vigor. These supplied cheap and indispensable, but hitherto wholly lacking, means of transportation to the hunters; and at the same time the demand for  buffalo robes and hides became very great, while the enormous numbers of the beasts, and the comparative ease with which they were slaughtered, attracted throngs of adventurers. The result was such a slaughter of big game as the world had never before seen; never before were so many large animals of one species destroyed in so short a time. Several million buffaloes were slain. In 15 years from the time the destruction fairly began the great herds were exterminated. In all probability there are not now, all told, 500 head of wild buffalo on the American continent; and no herd of a hundred individuals has been in existence since 1884.

The first great break followed the building of the Union Pacific Railway. All the buffalo of the middle region were then destroyed, and the others were split into two vast sets of herds, the northern and the southern. The latter were destroyed first, about 1878; the former not until 1883. My own chief experience with buffalo was obtained in the latter year, among small bands and scattered individuals, near my ranch on the Little Missouri River. But two of my kinsmen were more fortunate and took part in the chase of these lordly beasts when the herds still darkened the prairie as far as the eye could see.

During the first two months of 1877, my brother Elliott, then a lad not seventeen years old, made a buffalo-hunt toward the edge of the Staked Plains in Northern Texas. He was thus in at the death of the southern herds; for all, save a few scattering bands, were destroyed within two years of this time. He was with my cousin, John Roosevelt, and they went out on the range with six other adventurers.

It was a party of just such young men as frequently drift to the frontier. All were short of cash, and all were hardy, vigorous fellows, eager for excitement and adventure. My brother was much the youngest of the party, and the least experienced; but he was well-grown, strong and healthy, and very fond of boxing, wrestling, running, riding, and shooting; moreover, he had served an apprenticeship in hunting deer and turkeys. Their mess-kit, ammunition, bedding, and provisions were carried in two prairie-wagons, each drawn by four horses. In addition to the teams, they had six saddle-animals — all of them shaggy, unkempt mustangs. Three or four dogs, setters and half-bred greyhounds, trotted along behind the wagons. Each man took his turn for two days as teamster and cook; and there were always two with the wagons, or camp, as the case might be, while the other six were off hunting, usually in couples. The expedition was undertaken partly for sport and partly with the hope of profit; for, after purchasing the horses and wagons, none of the party had any money left, and they were forced to rely upon selling skins and hides, and, when near the forts, meat.

They started on January 2nd, and shaped their course for the head-waters of the Salt Fork of the Brazos, the center of abundance for the great  buffalo herds. During the first few days they were in the outskirts of the settled country, and shot only small game — quail and prairie fowl; then they began to kill turkey, deer, and antelope. These they swapped for flour and feed at the ranches or squalid, straggling frontier towns. 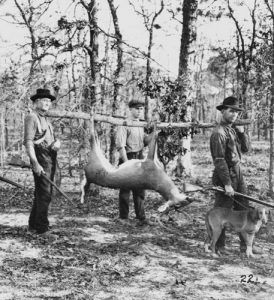 On several occasions the hunters were lost, spending the night out in the open, or sleeping at a ranch, if one was found. Both towns and ranches were filled with rough customers; all of my brother’s companions were muscular, hot-headed fellows; and as a consequence they were involved in several savage free fights, in which, fortunately, nobody was seriously hurt. My brother kept a very brief diary, the entries being fairly startling from their conciseness. A number of times, the mention of their arrival, either at a halting-place, a little village, or a rival buffalo-camp is followed by the laconic remark, “big fight,” or “big row”; but once they evidently concluded discretion to be the better part of valor, the entry for January 20th being, “On the road — passed through Belknap — too lively, so kept on to the Brazos — very late.” The buffalo-camps in particular were very jealous of one another, each party regarding itself as having exclusive right to the range it was the first to find; and on several occasions this feeling came near involving my brother and his companions in serious trouble.

While slowly driving the heavy wagons to the hunting grounds they suffered the usual hardships of plains travel. The weather, as in most Texas winters, alternated between the extremes of heat and cold. There had been little rain; in consequence water was scarce. Twice they were forced to cross wild, barren wastes, where the pools had dried up, and they suffered terribly from thirst. On the first occasion the horses were in good condition, and they traveled steadily, with only occasional short halts, for over thirty-six hours, by which time they were across the waterless country. The journal reads: “January 27th — Big hunt — no water, and we left Quinn’s blockhouse this morning 3 A.M. — on the go all night — hot. January 28 — No water — hot — at seven we struck water, and by eight Stinking Creek — grand ‘hurrah.'” On the second occasion, the horses were weak and traveled slowly, so the party went forty-eight hours without drinking. “February 19th — Pulled on twenty-one miles — trail bad — freezing night, no water, and wolves after our fresh meat. 20 — Made nineteen miles over prairie; again only mud, no water, freezing hard — frightful thirst. 21st — Thirty miles to Clear Fork, fresh water.”