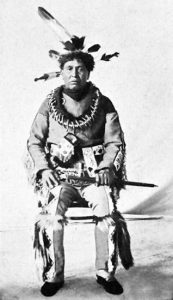 The Algonquin people, sometimes spelled Algonkin, are an Indigenous people of Eastern Canada. These closely related Algonquian-speaking bands should be differentiated from the Algonquian language family, as the latter term refers to a much larger entity composed of at least 24 tribes of Northeast Indians and Plains Indians.

Traditionally, Algonquin people shared many cultural traits with the tribes flanking them on the east, such as the Innu, and with the Ojibway to the west.

Before colonization by the French, Dutch, and English, the Algonquin were organized in bands of patrilineal extended families. They lived in villages of small round buildings called wigwams. With tribes originally numbering in the hundreds, they spoke several different dialects. The Algonquin were semi-nomadic hunter-gatherers, collecting food primarily from fishing and hunting. During the winter, bands dispersed across the landscape to hunt and in the spring and summer they planted small gardens, collected wild plant foods and tapped maple trees to make syrup.

Constantly at war with the Iroquois, the latter called the Algonquin “Adirondack,” a derogatory name, which meant “they eat trees.” They held that a single supernatural force called Manitou imbued all nature. 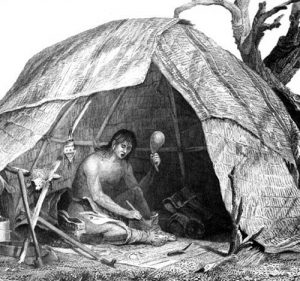 The Algonquin were first encountered by the French explorer Samuel de Champlain in 1603. During colonization, the Algonquin became heavily involved in the fur trade. The closeness of the Algonquin to the French, led to their temporary dislodgement from the Ottawa River area by the Iroquois.

Algonquin descendants number more than 10,000 and mostly live in the modern Ontario/Quebec area of Canada. Many Algonquins still speak the Algonquin language.