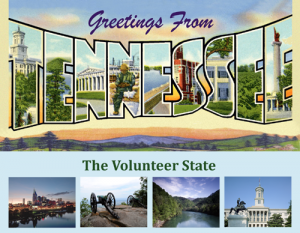 What is now Tennessee was initially part of North Carolina, and later part of the Southwest Territory. Tennessee was admitted to the Union as the 16th state on June 1, 1796.

Dominating the eastern part of the state are the majestic Appalachian Mountains, and here, can be found the Great Smoky Mountain National Park, the nation’s most visited national park. Here, can also be found a section of the Appalachian Trail, which roughly follows the Tennessee-North Carolina border. In the eastern part of the state is also the Cumberland Gap National Historical Park commemorating a vital early phase in the westward movement. The terrain drops down to the west to the lowlands and the Mississippi River, which forms the state’s western border.

The Volunteer State was heavily involved in the Civil War, and a number of battle sites and museums can be visited. Other major tourist attractions include the Tennessee Aquarium in Chattanooga, the Sunsphere in Knoxville, Dollywood in Pigeon Forge, the Parthenon, Country Music Hall of Fame and Museum, and Ryman Auditorium in Nashville, and Elvis Presley’s Graceland residence and tomb in Memphis.

The Confederate States of America

History of the Volunteer State 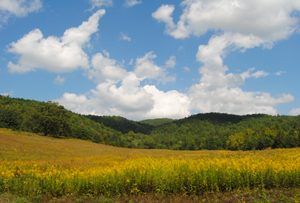 Tennessee Flag – Adopted in 1905, the three stars on the flag represent the three different landforms in Tennessee. Mountains in the east, highlands in the middle and lowlands in the west. The stars are bound together in unity by the circular white band. The field is crimson with a blue background for the stars.