The life of Dull Knife, the Cheyenne Chief, is a true hero tale. He is a pattern for heroes of any race, simple, child-like yet manful, and devoid of selfish aims or love of gain.

Dull Knife was a chief of the old school. Among all the Indians of the plains, nothing counts save proven worth. His courage, unselfishness, and intelligence measure a man’s caliber. Many writers confuse history with fiction, but in Indian history, their women and old men, and even children witness the main events. Not being absorbed in daily papers and magazines, these events are rehearsed repeatedly with few variations. Though orally preserved, their accounts are therefore accurate. But they have seldom been willing to give reliable information to strangers, especially when asked and paid for.

Racial prejudice naturally enters into the account of a man’s life by enemy writers, while one is likely to favor his race. I am conscious that many readers may think I have idealized the Indian.

Therefore I will confess now that we have too many weak and unprincipled men among us. When I speak of the Indian hero, I do not forget the mongrel in spirit, false to the ideals of his people. Our trustfulness has been our weakness, and when the vices of civilization were added to our own, we fell heavily.

It is said that Dull Knife was resourceful and self-reliant as a boy. He was only nine years old when his family was separated from the rest of the tribe while on a buffalo hunt. His father was away and his mother busy, and he was playing with his little sister on the banks of a stream when a large herd of buffalo swept down upon them on a stampede for water. His mother climbed a tree, but the little boy led his sister into an old beaver house whose entrance was above water, and here they remained in the shelter until the buffalo passed and their distracted parents found them.

Dull Knife was a youth when his tribe was caught in a region devoid of game and threatened with starvation one winter. Heavy storms worsened the situation, but he secured help and led a relief party a hundred and fifty miles, carrying bales of dried buffalo meat on pack horses.

Another exploit that made him dear to his people occurred in battle when his brother-in-law was severely wounded and left lying where no one on either side dared to approach him. As soon as Dull Knife heard of it, he got on a fresh horse and made so daring a charge that others joined him; thus, under cover of their fire, he rescued his brother-in-law and in so doing, was wounded twice.

The Sioux knew him as a man of high type, perhaps not so brilliant as Roman Nose and Two Moon, but surpassing both in honesty and simplicity, as well as in his war record. (Two Moon was never a leader of his people and became distinguished only in wars with the whites during the period of revolt.) A story is told of an ancestor of the same name that illustrates well the spirit of the age.

It was customary for the older men to walk ahead of the moving caravan and decide upon all halts and camping places in those days. One day the councilors came to a grove of wild cherries covered with ripe fruit, and they stopped at once. Suddenly a grizzly charged from the thicket. The men yelped and hooted, but the bear was not to be bluffed. He knocked down the first warrior who dared to face him and dragged his victim into the bushes.

The whole caravan was in the wildest excitement. Several of the swiftest-footed warriors charged the bear to bring him out into the open, while the women and dogs made all the noise they could. The bear accepted the challenge, and as he did so, the man they had supposed dead came running from the opposite end of the thicket.

The Indians were delighted, especially when, amid their cheers, the man stopped running for his life and began to sing a Brave Heart song as he approached the grove with his butcher knife in his hand. He would dare his enemy again!

The grizzly met him with a tremendous rush, and they went down together. Instantly the bear began to utter cries of distress, and at the same time, the knife flashed, and he rolled over dead. The warrior was too quick for the animal; he first bit his sensitive nose to distract his attention and then used the knife to stab him to the heart. 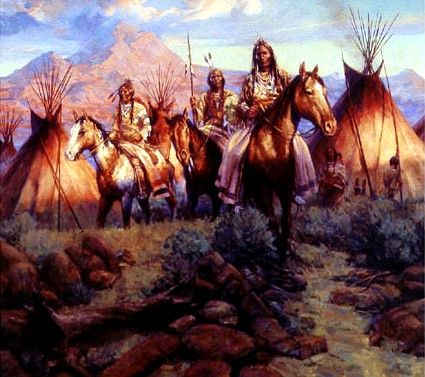 After that, he fought many battles with knives and claimed that the bear’s spirit gave him success. On one occasion, however, the enemy had a strong buffalo-hide shield which the Cheyenne bear fighter could not pierce through, and he was wounded; nevertheless, he managed to dispatch his foe. From this incident, he received the name of Dull Knife, which was handed down to his descendant.

As is well known, the Northern Cheyenne uncompromisingly supported the Sioux in their desperate defense of the Black Hills and Big Horn country. Why not? It was their last buffalo region — their subsistence. It was what our wheat fields are to a civilized nation.

About 1875, propaganda was started for confining all the Indians upon reservations, where they would be practically interned or imprisoned, regardless of their possessions and rights. The men who were the strongest advocates of the scheme generally wanted the Indians’ property — the one leading cause back of all Indian wars. From the warlike Apaches to the peaceful Nez Perce, all the tribes of the plains were hunted from place to place; then the government resorted to peace negotiations, but always with an army to coerce. Once disarmed and helpless, they were taken under military guard to the Indian Territory.

A few resisted and declared they would fight to the death rather than go. Among these were the Sioux, but nearly all the smaller tribes were deported against their wishes. Of course, those Indians who came from a mountainous and cold country suffered severely. The moist heat and malaria decimated the exiles. Chief Joseph of the Nez Perce and Chief Standing Bear of the Ponca appealed to the people of the United States and finally succeeded in having their bands, or the remnant of them returned to their part of the country. Dull Knife was unsuccessful in his plea, and the story of his flight is one of poignant interest.

The authorities regarded him as a dangerous man, and with his depleted band, was taken to the Indian Territory without his consent in 1876. When he realized that his people were dying like sheep, he was deeply moved. He called them together. Every man and woman declared that they would rather die in their own country than stay there longer, and they resolved to flee to their northern homes.

Here again, was displayed the genius of these people. From the Indian Territory to Dakota is no short dash for freedom. They knew what they were facing. Their line of flight lay through a settled country, and the army would closely pursue them. No sooner had they started than the telegraph wires sang one song: “The panther of the Cheyenne is at large. Not a child or a woman in Kansas or Nebraska is safe.” Yet, they evaded all the pursuing and intercepting troops and reached their native soil. The strain was terrible, the hardship great, and Dull Knife, like Joseph, was remarkable for his self-restraint in sparing those who came within his power on the way.

But fate was against him, for there were those looking for blood money who betrayed him when he thought he was among friends. His people were tired and hungry when surrounded and taken to Fort Robinson Nebraska. The men were put in prison, and their wives guarded in camp. They were allowed to visit their men on certain days. Many of them had lost everything; there were but a few who had even one child left. They were heartbroken. 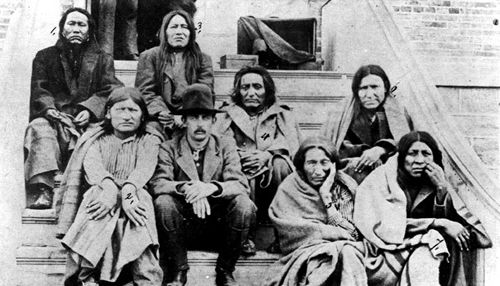 These despairing women appealed to their husbands to die fighting: their liberty was gone, their homes were broken up, and only slavery and gradual extinction were in sight. At last, Dull Knife listened. He said: “I have lived my life. I am ready.” The others agreed. “If our women are willing to die with us, who is there to say no? If we are to do the deeds of men, it rests with you women to bring us our weapons.

As they had been allowed to carry moccasins and other things to the men, they contrived to take in some guns and knives under this disguise. The plan was to kill the sentinels and run to the nearest natural trench to make their last stand. The women and children were to join them. This arrangement was carried out. Not every brave had a gun, but all had agreed to die together. They fought till their small store of ammunition was exhausted, then exposed their broad chests for a target, and the mothers even held up their little ones to be shot. Thus died the fighting Cheyenne and their dauntless leader.

Editor’s Note: Dull Knife did not die in this last battle but escaped with his wife, son, and daughter-in-law, who made their way to the Sioux Pine Ridge Agency in South Dakota. Later, he lived on a reservation assigned to the surviving Cheyenne in the Rosebud Valley. He died in 1883 and was buried on high ground near his home.

By Charles A. Eastman, 1918. Compiled and edited by Kathy Alexander/Legends of America, updated February 2022. 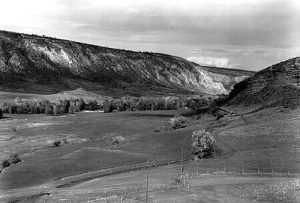 About the Author: Excerpted from the book Indian Heroes and Great Chieftains, by Charles A. Eastman, 1918. However, the text as it appears here is not verbatim as it has been edited for clarity and ease of the modern reader. Charles A. Eastman earned a medical degree from Boston University School of Medicine in 1890 and then began working for the Office of Indian Affairs later that year. He worked at the Pine Ridge Agency, South Dakota, and was an eyewitness to both events leading up to and following the Wounded Knee Massacre of December 29, 1890. Himself part-Sioux, he knew many of the people about whom he wrote.