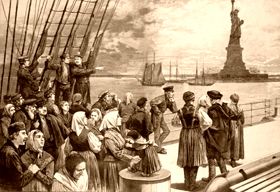 Long before the Civil War and the days of the Wild West, early American History began with those first Native Americans who settled upon this land some 15,000 years ago. But, the history of the United States begins with those first early explorers, beginning with the Spanish, and continuing with various explorers from England, France, the Netherlands, and other European countries.

By the 16th century, Europeans had introduced horses, cattle, and pigs to the continent, new seeds for farming, inventions never before seen by Native Americans, firearms, and, unfortunately, diseases.

Spain, France, the Netherlands, Russia, and England formed colonies that would later become part of the U.S. Territory. But, it would be the original 13 English colonies that would become the first U.S. states. These colonies began to be established along the east coast in 1607 and grew rapidly over the next half-century, reaching a population of 50,000 by 1650. Immigration continued steadily; by 1700, the English colonies were called home to about 250,000 people.

During these early years, several conflicts occurred between the Native Americans and the colonists, including a Powhatan uprising in Virginia in 1622, King Philip’s War in present-day southern New England in 1675-76, and the Yamasee War in colonial South Carolina in 1715-17. Other small-scale wars also took place outside the colonies, including the French and Indian War to the north and other skirmishes between the Spanish and the Indians to the south.

By the mid-1750s, the colonists were prospering, with most free men owning their farms, and the colonies primarily governed themselves. Though “officially” under the rule of the British Crown, the immigrants rarely had to deal with them as the home government had permitted wide latitude to local colonial governments. However, this changed in the 1760s when Britain demanded that the colonists pay taxes. The colonists, who were not represented in the British government, rebelled.

More taxes were initiated in 1765; later, a tax on tea resulted in the Boston Tea Party in 1773 and, ultimately, the American Revolution. As the British responded with force, the Continental Congress was convened in 1775 to organize the colonies’ defense, which supported some 2.5 million people by that time. The new United States of America declared independence on July 4, 1776, which announced that the 13 American colonies then at war with Great Britain were now independent states and thus no longer a part of the British Empire.

When the war was finally over in 1783, the founding fathers struggled to establish a fledgling government and created the Constitution in 1788. The first ten amendments, known as the Bill of Rights, quickly followed. The new national government under President George Washington began operation in 1789.

The growth of the United States dramatically expanded with the Louisiana Purchase in 1803, which began westward expansion in earnest. After the Mexican-American War ended in 1848, the nation grew again, reaching the Pacific Ocean.

Rapid economic and population growth created a powerful nation, but when tensions escalated between the slave-holding plantation South and the industrial North, the Civil War began in 1861, plunging the nation into the deadliest war in American history. When it was finally over in 1865, tens of thousands of emigrants pushed westward, ushering in the days of the Old West.

A Century Of Exploration

The American Tradition of Thanksgiving

African Americans in the Revolutionary Period

Thomas Jefferson — The Sage of Monticello 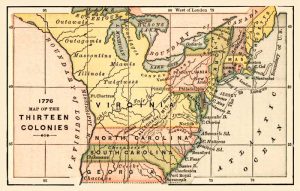