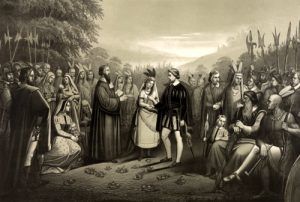 Fought between English settlers of the Virginia Colony and Indians of the Powhatan Confederacy, this was a series of three intermittent conflicts that lasted from about 1610 through 1646. The first war started in 1609 or 1610 after the relationship between the Powhatan Indians and the English had soured due to the English demands for food. That winter of 1609-10 is known as the “Starving Time.”

During that winter, the English were afraid to leave the fort due to a legitimate fear of being killed by the Powhatan Indians. As a result, they ate anything they could: various animals, leather from their shoes and belts, and sometimes fellow settlers who had already died. By early 1610 most of the settlers, 80-90%, had died due to starvation and disease. Peace and improved relations occurred after English settler John Rolfe married Pocahontas, the Chief Powhatan’s daughter, in 1614.

A few years later, in 1617, Pocahontas died, and the following year, her father, Powhatan Chief Wahunsunacock, also passed away. His succession was briefly passed on to his younger brother, Opitchapam, and then to his next younger brother Opechancanough. On March 22, 1622, Opechancanough, tired of English expansion, planned a coordinated attack on the English settlements. Because of a young Indian boy’s warning, Jamestown, Virginia was spared. 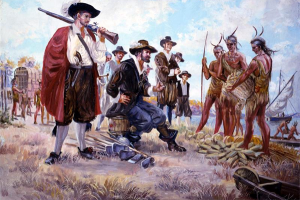 Powhattan Braves and the English

Many outlying settlements were attacked, and of a population of about 1,200 settlers, about 350-400 were killed. After the Powhatan Indians withdrew, as was their way, to wait for the English to pack up and leave. However, the English did not leave, and more conflicts arose and continued on and off for the next ten years, with few decisive victories. The settlers gave up the idea of coexisting with the Indians to begin a policy of extermination. By 1632, the Powhatan were pressured into land concessions in the western area of Chesapeake Bay.

In 1644, the third and last conflict of the Powhatan Wars began. Even though the English population, by this time, had risen to about 8,000, Opechancanough was still upset about the English encroachment on the land and planned another attack. Once again, approximately 350-400 English were killed.

Two years later, in 1646, Opechancanough, who was about 100, was captured by the English. While in captivity, he was shot in the back by an English guard – against orders – and killed. His death began the end of the Powhatan Chiefdom. It also resulted in a boundary being defined between the Indians and English lands that could only be crossed for official business with a special pass. That situation lasted until 1677, when the Treaty of Middle Plantation was negotiated, which established Indian reservations following Bacon’s Rebellion.