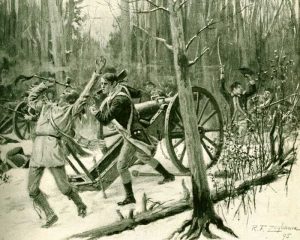 The Old Northwest War, occurring between 1785 to 1795, erupted as settlers pushed into the “Old Northwest Territory” in present-day Ohio and Indiana.

Also known as the Ohio War and Little Turtle’s War, the confrontation occurred over control of the Northwest Territory between the United States and a confederation of numerous Native American tribes, with support from the British.

Called the Miami Campaign by the U.S. Military, the soldiers pushed back as hostile Indians, chiefly the Miami, Delaware, Potawatomi, Shawnee, and others, resisted this expansion. Three separate expeditions of military forces were soon sent in to remove this obstacle to expansion. 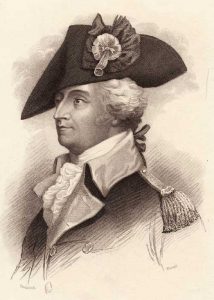 In the fall of 1790 a force of 320 regular army troops, along with 1,000 Kentucky and Pennsylvania militiamen led by Brigadier General Josiah Harmar, moved north from Fort Washington, in present-day Cincinnati, Ohio but were severely defeated in two separate engagements on October 18th and 22nd in the vicinity of present-day Fort Wayne, Indiana. These troops, consisting primarily of untrained recruits and volunteer militiamen, suffered about 1,000 killed, a number far higher than their opponents. This defeat was among the worst ever suffered in the history of the U.S. Army.

Congress reacted to these losses by doubling the authorized strength of the Regular Army in 1792 and appointed “Mad” Anthony Wayne to lead the troops. In the Spring of 1793, Wayne reorganized the soldiers and began extensive training programs At Fort Washington. After an organized campaign up the Great Miami and Maumee river valleys in western Ohio Country, he led his men to a decisive victory at the Battle of Fallen Timbers near the southwestern shore of Lake Erie in 1794. More battles occurred in the following months until the Indians were defeated and their villages destroyed.

Afterward, the defeated tribes were forced to cede extensive territory, including much of present-day Ohio, in the Treaty of Greenville in 1795. The Jay Treaty in the same year also arranged for cessions of British Great Lakes outposts on the great U.S. territory. 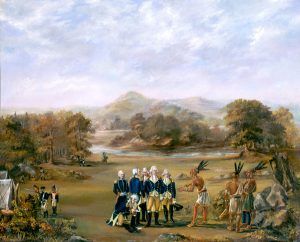