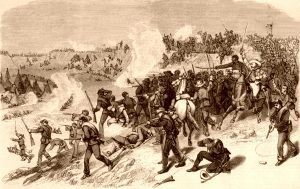 Nez Perce Military Campaign occurred in 1877 when the southern branch of the Nez Perce led by Chief Joseph refused to give up their ancestral lands on the Oregon-Idaho border and enter a reservation.

When negotiations broke down and Nez Perce hotheads killed settlers in early 1877, the 1st Cavalry was sent to compel them to come into the reservation. Chief Joseph chose to resist and undertook an epic retreat of some 1,600 miles through Idaho, Yellowstone Park, and Montana during which he engaged 11 separate commands of the Army in 13 battles and skirmishes in a period of 11 weeks. The Nez Perce chieftain revealed remarkable skill as a tactician and his braves demonstrated exceptional discipline in numerous engagements, especially those on the Clearwater River on July 11, in Big Hole Basin on August 9-12, and in the Bear Paw Mountains where he surrendered with the remnants of his band to Colonel Nelson Miles on October 4, 1877.

Major General O. O. Howard, commander of the Department of the Columbia, and Colonel John Gibbon also played a prominent part in the pursuit of Joseph, which, by the end of September 1877 had involved elements of the 1st, 2d, 5th, and 7th Cavalry, the 5th Infantry, and the 4th Artillery.