The Ghost of Armbruster Pike

Bugsy Siegel and the Re-birth of Las Vegas

The Death of Sheriff Tom Logan

People of the Bullfrog Mining District

Rhyolite – Little More Than a Memory

Swindle at the Gold Bar Mine

Tybo – Plight of the Chinese

The Ghosts of Lake Mead

A Midnight Adventure in Nevada

Nevada Triangle – A Trap in the Mountains

Pioneers on the Nevada Frontier

Tales of the Overland Stage

Violence on the Nevada Frontier 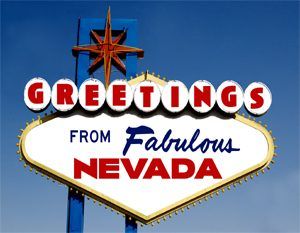 Before the first white explorers entered Nevada, the region was inhabited by the Paiute, Shoshone, and Washoe tribes. The first European to come to the area is thought to have been Spanish priest Francisco Garces in 1776. The area formed part of the Viceroyalty of New Spain and was called  Nevada (snowy) due to the snow which covered the mountains in winter. The state became part of Mexico when it gained independence in 1821. In 1826 Peter Skene Ogden of the British Hudson’s Bay Company came to Nevada in a prelude to his later exploration of the Humboldt River. The same year, American trapper Jedediah Smith began to traverse the state.

The region was annexed by the United States in 1848 after its victory in the Mexican-American War, and it was incorporated as part of Utah Territory in 1850.

The discovery of silver at the Comstock Lode in 1859 led to a population boom and Nevada Territory was carved out of Utah Territory in 1861. It became the 36th state three years later on October 31, 1864.

Today, much of the state’s economy is tied to tourism.  Whether it’s enjoying a concert in Las Vegas, visiting one of the many ghost towns, such as Rhyolite, Gold Point, or Treasure City; or, sailing on Lake Tahoe; Nevada is a playground for visitors.

You can ski in the winter at Mount Charleston, go climbing at Red Rock Canyon, golf at hundreds of courses, enjoy 24 state parks and 314 mountain ranges, and of course, gamble pretty much anywhere if that’s your fancy.

Welcome to the Silver State!

Nevada State Flag – On a cobalt blue field, a variant of the state’s emblem sits in the upper left-hand corner. The emblem is a five-pointed silver star placed between two sprays of sagebrush crossed to form a half wreath; across the top of the wreath is a golden scroll with the words, in black letters, “Battle Born.” The name “Nevada” is beneath the star in gold letters. The current Nevada State Flag design was adopted on March 26, 1929, and revised in 1991. 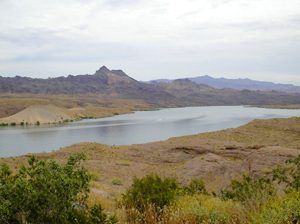 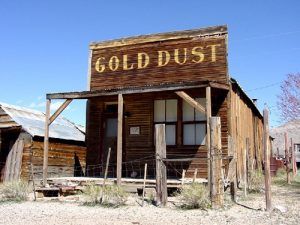