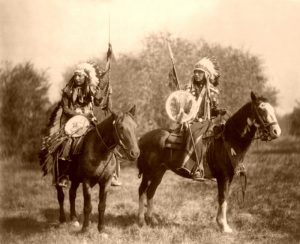 The Sioux Wars were a series of conflicts between the United States and various bands of the Sioux people which occurred in the latter half of the 19th century.

Sioux warriors assisted the British during the American Revolution as well as the War of 1812 and made their first treaty with the United States in 1815. Numerous treaties would follow, giving the tribe control of a vast region that encompassed much of what is today Missouri, Iowa, Wyoming, the Dakotas, Minnesota, and Wisconsin. Over the years, their landholdings would be reduced by more treaties.

The earliest conflict came in 1854 when a fight broke out near Fort Laramie, Wyoming. Attacks and counterattacks followed for the next several decades as white settlers pushed westward and encroached westward upon Sioux lands. The fighting wouldn’t end until the final incident in 1890 during the Ghost Dance War.

There was a time when the land was sacred,
and the ancient ones were as one with it.
A time when only the children of the Great Spirit
were here to light their fires in these places with no boundaries…
In that time, when there were only simple ways,
I saw with my heart the conflicts to come,
and whether it was to be for good or bad,
what was certain was that there would be change. 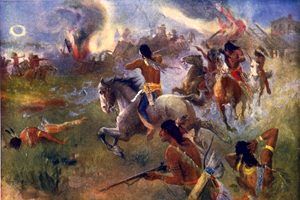 The siege of New Ulm, Minnesota by Henry A. Schwabe 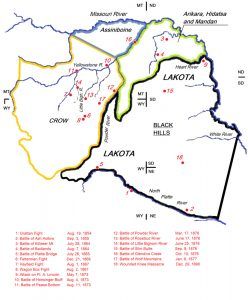 “This war did not spring up on our land, this war was brought upon us by the children of the Great Father who came to take our land without a price, and who, in our land, do a great many evil things… This war has come from robbery – from the stealing of our land.” – Spotted Tail 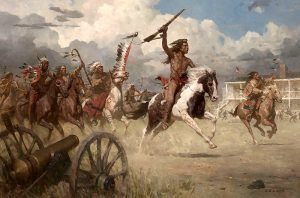 The Charge of Crazy Horse by Z.S. Liang, Greenwich Workshop