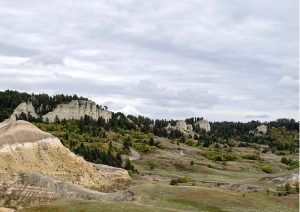 The Battle of Slim Buttes was fought in Harding County, South Dakota, between the Sioux and the United States Army on September 9 and 10, 1876.

Following the Rosebud and Little Bighorn’s disastrous battles in Montana in June 1876, General Phillip H. Sheridan, in command of the Department of Missouri, ordered Generals Alfred Terry and George Crook to pursue the Indian warriors and their followers. By September, the generals had not located any bands of Native Americans and separated when they reached the mouth of Powder River in Montana. General Crook then moved eastward toward the Little Missouri River in western North Dakota, where he expected to find the Indians. After crossing the river, he found that all the Indian trails seemed to lead toward the Black Hills. Although his command was practically out of provisions, he decided to start the 200-mile trip south. 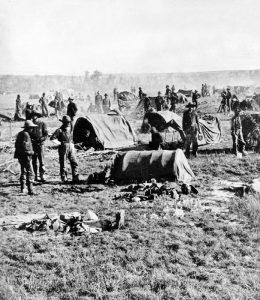 The caravan of troops, numbering some 2,000 men, later became known as “Crook’s Starvation March.” It had been raining for several days, the prairie had been burned off, and consequently, there was little feed for the horses. Approximately 25 to 35 miles a day were made despite the hardships. As they continued, many exhausted horses and mules collapsed and were then killed and butchered to feed the men, who had almost no provisions.

As the campaign continued into fall, General Crook’s column found itself out of supplies, and his men were exhausted. On September 7, 1876, the troops reached the Grand River, and General Crook decided to send 150 men under the command of Captain Anson Mills of the 3rd Cavalry to leave immediately for Deadwood, South Dakota, and bring back food and provisions.

Unexpectedly, on September 8th, as the column under Captain Anson Mills was making its way to the Black Hills, Frank Grouard, the chief scout, spied an Indian village located at Slim Buttes on both banks of a small stream called Rabbit Creek. Further investigation revealed the presence of Oglala Chief American Horse and his followers and other Indians of the  Minneconjous, Brule, and Cheyenne tribes, numbering 37 lodges and about 260 people of whom 30 to 40 were warriors. After reporting this find, Captain Mills ordered the troops to hide in a ravine, with plans to attack the village the next morning. 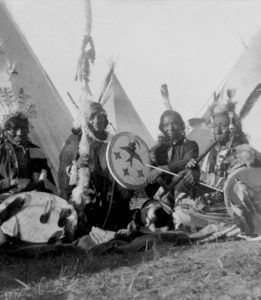 Early on the morning of September 9th, the pack train was left with 25 men, while Mills’s Third Cavalry troopers, led by Lieutenant John W. Bubb, surrounded the village of 37 lodges and attacked indiscriminately, killing men, women, and children. Taken by surprise, the Indians cut their way out of the back of some of their rawhide tipis, and after firing two volleys into the soldiers, took to the brush and ravines, carrying their dead and wounded with them. Two men of Company E were wounded, including Lieutenant Adolphus Von Luettwitz, in the kneecap and Private Currin in the thigh. Von Luettwitz’s wound required amputation of part of his leg.

As soon as the Indians had taken care of their women and children, they returned and surrounded the soldiers. Under the constant firing of many Indians, including women and children, were killed and wounded. When the firing subsided, Captain Crawford ordered J.A. Kirkwood to take five men and go into all the lodges to see whether there were any Indians left, but they were gone. Those Indians who were able to escape soon sent word of the attack to other nearby Indian villages.

Meanwhile, in a ravine nearby, some Indians were firing at the troops on the skirmish line. John Wenzel, of Company E, was shot through the forehead and killed instantly. Private Kirkwood and Private Clevensky tried to get to the Indians from the west side but failed. Kirkwood received a flesh wound in the side, and Sergeant Glass had his arm shattered. 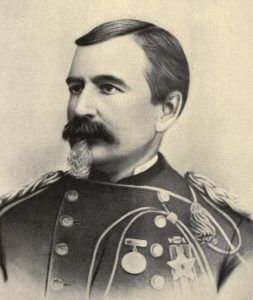 After the Indians withdrew, several soldiers entered the deserted village to survey its contents. The soldiers confiscated many provisions from the Indians, including over 5,500 pounds of dried meat, large amounts of dried fruits, robes, ammunition, arms, ammunition, and several hundred ponies. The troopers also recovered items from the Battle of Little Bighorn, including a 7th Cavalry Regiment flag fastened to the lodge of Chief American Horse, the bloody gauntlets of slain Captain Myles Keogh, 30 saddles, three 7th Cavalry horses, and other personal effects of the many soldiers killed in the battle. In one tipi, $11,000 was found. Afterward, the village was torched.

In the meantime, Captain Mills sent three  soldiers back to General Crook with the message, “to come as he had captured an Indian village.” Upon hearing the news, Crook was extremely angry, as his priority was feeding his men and had ordered Mills to avoid a fight should he encounter a large village and instead “cut around it.”

The next morning, the Indians had fortified their numbers and began to attack the soldiers. General Crook arrived at about 11:30 a.m., and the fighting continued, after which U.S. Scout Jonathan White was shot in the forehead by the Indians. 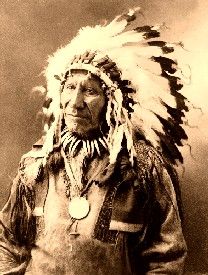 A group of Indians, under the leadership of Chief American Horse, made their way to a ravine but were outnumbered and were finally forced to surrender. Chief American Horse was shot through the abdomen during the fight and died several days later. At the end of the battle, it is estimated that the number of Indians increased to around 800 warriors, while Crook’s forces numbered 2,000.

That evening Chief Crazy Horse and his band came to take on the soldiers, but when they found the entire force there, withdrew after a small skirmish during which five men were wounded, including Private Edward Kennedy so badly he died during an amputation.

The entire Indian loss was not known as many of their dead were carried away. However, the soldiers found where the women had dug a hole in the ravine and buried four braves, six women, and 13 children. The loss of men under Captain Mills’ command included three dead and 14 wounded. 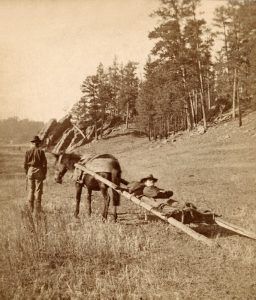 Wounded Soldier on a Travois after the Slim Buttes Battle, by Stanley J. Morrow, 1876

The next morning the three soldiers and Von Ludwick’s leg were buried. The men then made a large fire over the burial place to conceal it from the Indians. On September 10th, the command continued towards Deadwood with the wounded men pulled in stretchers. As he was being carried, Lieutenant Von Ludwick kept insisting that the Indians were cutting up his leg, and such proved to be the case. The next day Major Mason was sent back with five companies of the 5th Cavalry to investigate, and they found that the remains of the dead soldiers had been dug up, cut to pieces, and their bones crushed.

The Battle of Slim Buttes was the first U.S. Army victory of the Great Sioux War of 1876. More assaults during the fall and winter convinced most of the Sioux and Cheyenne of the futility of fighting the soldiers.

In August 1920, the Slim Buttes Battlefield Monument was dedicated. The monument sits about a half-mile northwest of where the village and battle were. By the side of this monument stand three grave markers for the three military men who lost their lives:

A roadside historical marker was also erected, which is located next to Highway 20. 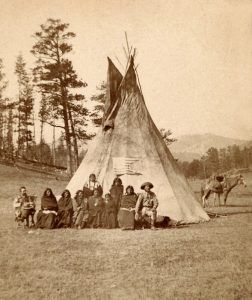 Sioux captured at the Battle of Slim Buttes, South Dakota by Stanley J. Morrow, 1876. Notice the 7th Cavalry flag on the front of the tipi.