Chicago, Illinois, where Route 66 begins, has a long and rich history along its way to becoming the third-largest city in the United States. Many of the vintage era icons have been obliterated with urbanization; however, it still has a few, especially along the city’s outskirts, and downtown Chicago provides a rich view of historical buildings at the very place where Route 66 begins. 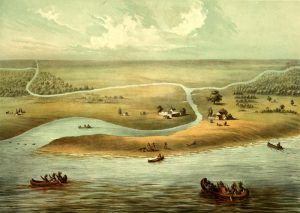 Chicago, Illinois in 1820, by Chicago Lithograph

The first settler in the Chicago area was in 1781 by Jean Baptiste Point du Sable, an African American from Santo Domingo. He chose a location at the mouth of the Chicago River for its strategic value for a trading post. Later in 1802, the same site was occupied by Fort Dearborn, which Native Americans regularly attacked until Chief Black Hawk was defeated in 1832. One year later, Chicago was officially incorporated as a town, and by 1837 it boasted more than 4,000 residents.

In 1848, the first railroad reached Chicago, and the town began to boom. By 1860 it had a dozen railroad lines into the city and a population of more than 100,000. Incredibly, just ten years later, this number had tripled, and Chicago was on its way to becoming one of the biggest cities in the nation. 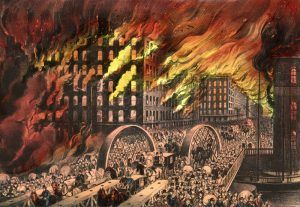 In 1871 disaster struck the city with the Great Chicago Fire laying a large part of the town in ashes. Raging for two days on October 8th and 9th, the fire destroyed 3.5 square miles, 17,450 buildings and killed as many as 300 people. However, Chicago endured, and just six weeks after the fire, construction of more than 300 buildings had begun.

Continuing to grow rapidly, Chicago developed “The El,” its first elevated railway in 1891. Circling the city’s downtown area, it was soon called the “Loop.” Though not the same engines of the 19th century, the “El” and the “Loop” continue to service Chicago commuters today.

It was also this same year that saw Chicago’s first skyscraper, the 16-story Monadnock Building at 53 W. Jackson Boulevard. 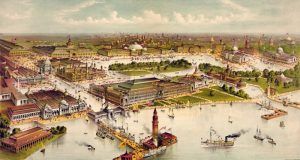 In 1893 Chicago hosted the World Columbian Exposition, which commemorated the discovery of America by Columbus some 400 years ago. Staging this magnificent event cost more than 27 million dollars. Hosted from May 1893 through October 1893, the fair covered 633 acres and attracted 27 million visitors, almost half of the US population.

Several firsts were introduced at the fair, including Cracker Jacks, Aunt Jemima Syrup, diet soda, and Pabst Beer. It was here that the carnival concept was born, the hamburger was introduced, and the United States introduced its first commemorative stamp and coin sets.

During the exposition, New York Sun editor Charles Dana, tired of hearing Chicagoans boast of the World’s Columbian Exposition, dubbed Chicago the “Windy City,” a name that has stuck today. 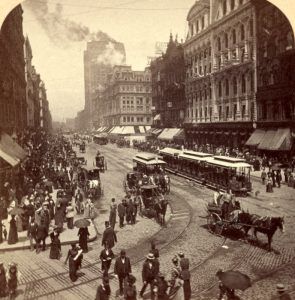 In 1896, Chicago saw the conviction of one of the nation’s first serial killers, Herman Mudgett. This little-known killer, who went by the name of Henry H. Holmes, was suspected of murdering hundreds of people using poison and gas, mainly young ladies seduced during the grand Chicago exposition, for the sheer pleasure of cutting up their bodies. Mudgett graduated from the University of Michigan Medical School but soon embarked upon a life of swindling, torture, and murder. Building a torture chamber at 63rd and Wallace, his sole purpose was murder. The building, equipped with gas chambers, incinerators, and other horrific devices, also had chutes that led to the basement where he could dispose of the bodies in iron tanks of acid and lime and a crematory. He was finally hanged on May 7, 1896. 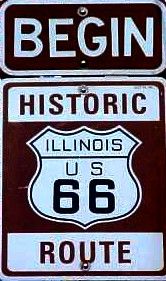 Before the advent of Route 66, there was already a popular road from Chicago to St. Louis called the Pontiac Trail. In 1918, Illinois began to pave the road, and by the time Route 66 was instituted, it was entirely paved. By 1927, the Route 66 signs were visible along the Illinois route, and Chicago sported numerous services to accommodate the travelers. During this time, Louis Armstrong, as a member of “King Oliver’s Creole Jazz Band,” had become a mainstay in Chicago, helping to usher in the Jazz Age.

By 1929, Chicago had become a dangerous place with gang warfare competing for the lucrative illicit bootleg liquor trade. Reaching its peak on February 14, seven members of the George “Bugs” Moran gang were killed in a North Clark Street garage when rival mobsters ambushed them. The police suspected that Al Capone and his gang were responsible for the eight-minute-long St. Valentine’s Day Massacre but could never prove it.

Instead, Capone was prosecuted for tax evasion and sentenced to 11 years in prison on October 24, 1931. Eight years later, on November 16, 1939, he was released. However, the rest of his life was not to be enjoyed as he suffered from the after-effects of syphilis, became mentally incapable, and died on January 25, 1947. 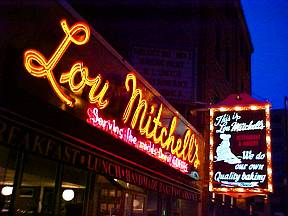 Lou Mitchell’s has been doing business in Chicago since 1923.

In the meantime, hundreds of travelers streamed through Chicago on their journey along Route 66. One such icon that remains today is Lou Mitchell’s Restaurant, located at 565 W Jackson Boulevard, serving up coffee and home-cookin’ since 1923. Nearby is Chicago’s Union Station, once home to one of the many Harvey House Restaurants, preserved and still serves Amtrak passengers today. The designated official beginning of the Mother Road begins at Grant Park on Adams Street in front of the Art Institute, where you will find the “Begin Route 66 Sign.”

Take Adams Street west for about 2.5 miles, then take a left onto Ogden Avenue, which leads you into an older and seedier part of town. After you pass through one of Chicago’s oldest parks, Douglas Park, you will see the Castle Car Wash at 3801 W Ogden on your left. Long closed, the carwash tends to serve now as more of a parking lot for the fire station across the street.

Entering the suburb of Cicero, which was the once infamous base of Al Capone’s operations, you can see several Route 66 era buildings, including the Cindy Lyn Motel at 5029 W Ogden and Henry’s Drive-In just a bit further down. 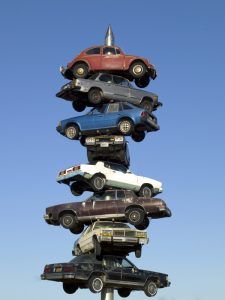 Cars on a spindle in Berwyn, Illinois, in 2007. Photo by Carol Highsmith.

Route 66 then rambles through the Chicago suburb of Berwyn, where there is not much to see other than aging strip centers. Not too long ago, there was a tall piece of artwork called the “Spindle,” a 40-foot spike in the air with nine cars skewered on top of it. Unfortunately, this unique piece of nostalgia was torn down in May 2008 and not replaced.

Old Route 66 gets a little hard to follow here as the signs are not as prevalent, and two alignments occur as you enter Lyons. Get a few good maps and keep your eyes open as you continue your journey through the small towns of McCook and Plainfield on your way to Romeoville and Joliet.

To About Illinois Route 66