Black Hawk War Campaign, lasting from April 6 to September 30, 1832, was a brief conflict between the United States and Native Americans led by Black Hawk, a Sauk leader.

At that time, a faction of Sac and Fox Indians, living in eastern Iowa and led by Chief Black Hawk, threatened to go on the warpath in 1832 when squatters began to preempt Illinois lands formerly occupied by the two tribes. The faction held that the cession of these lands to the Federal Government in 1804 had been illegal. Black Hawk asserted he would remove the squatters forcibly and attempted without success to organize a confederacy and ally with the British. 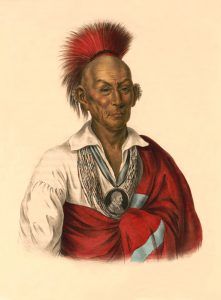 Finally, when Black Hawk’s followers, including some 500 warriors, crossed the Mississippi River into Illinois in early 1832 and refused to return, the 1st and 6th Infantry under Brigadier General Henry Atkinson, together with Illinois militia, set out in pursuit up the Rock River. A volunteer detachment suffered heavy losses in a skirmish on May 14, 1832, near present-day Dixon, Illinois, and Atkinson had to pause to recruit new militia members. On July 21, a volunteer force severely chastised Black Hawk’s band in Madison, Wisconsin. Atkinson ultimately defeated what remained of it at the confluence of the Mississippi and Bad Axe Rivers on August 2, 1832, capturing Black Hawk and killing 150 of his braves.

Compiled and edited by Kathy Alexander/Legends of America, updated December 2022.