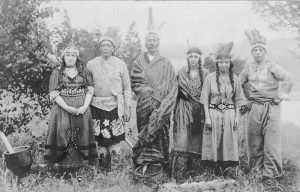 The Mohegan people are a federally recognized tribe and sovereign tribal nation with a reservation located on the Thames River in Uncasville, Connecticut. Mohegan means wolf. So does Mahican, but these are the names of two distinct Algonquian tribes with different locations and histories. It is all too common for the Mohegan of the Thames River in eastern Connecticut to be confused with the Mahican from the middle Hudson Valley in New York (a distance of about 100 miles).

The Mohegan people consist of many originally independent tribes, including the Pequot and Montauk. They gradually became independent and served as allies of English colonists in the Pequot War of 1636, which broke the power of the formerly dominant Pequot tribe in the region. The Treaty of Hartford established English recognition of the tribe’s sovereignty in 1638, but during the colonial period, they lost lands, and the tribe struggled to maintain recognition of its identity.

The tribe reorganized in the late 20th century and filed a federal land claims suit, seeking to regain land that Connecticut had illegally sold. As part of the settlement, the Mohegan Nation gained federal recognition, and the Mohegan Indian Reservation was established. Here they have established gaming operations to generate revenue for the welfare and economic development of their tribe. The tribe has a current enrollment of about 1,300 people.