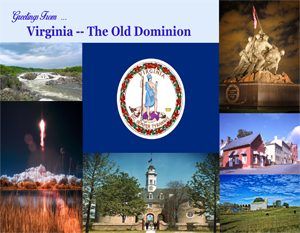 Nicknamed the “Old Dominion” and sometimes the “Mother of Presidents” after the eight U.S. presidents born there, Virginia has much to offer for sight-seeing, history buffs, and outdoor fun at beaches, mountains, and forests.

Historic Jamestown is the site of the first permanent English settlement in North America. It represents the very foundations of whom and what we are as a people and a nation.

Virginia was one of the 13 Colonies in the American Revolution and joined the Confederacy in the Civil War, during which time Richmond was made the Confederate capital, and Virginia’s northwestern counties separated to form the state of West Virginia.

Stories about historic figures, such as those surrounding Pocahontas and Captain John Smith, George Washington’s childhood, or the plantation elite in the slave society of the antebellum period, have created numerous myths of state history.

Virginia Flag – Virginia’s official state flag was adopted in 1861. The flag has a deep blue background with a white circle in the center. In the center are the words “Virginia” and “Sic Sempter Tyrannis,” which is Latin for “thus always to tyrants.” Depicting the state’s motto on the flag is the goddess Virtue holding a sword and a spear, who has defeated a tyrant, who is lying on the ground, and is holding a chain and a scourge. Nearby is the tyrant fallen crown. Virtue symbolizes Virginia, and the tyrant represents Britain. Red Virginia creepers and green leaves surround the scene. A white silk fringe is on the edge farthest from the flagstaff.

Chatham Manor and the Lady in White

Mad Gassers of Virginia and Illinois 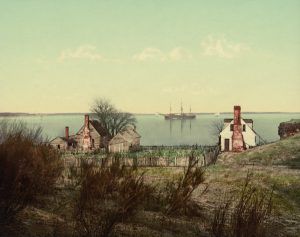 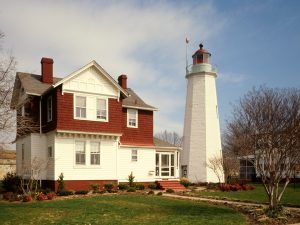