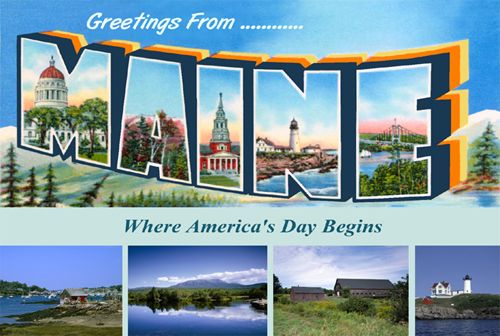 The most northern and eastern state of New England, Maine is known for its beautiful scenery including its rocky coastline, low, rolling mountains, its heavily forested interior and picturesque waterways. First settled in 1604, it became the nation’s 23rd state in 1820.

It is the largest state in New England, but the 12th smallest state by area in the nation, and the 9th least populous (as of 2010 census). European settlement began in 1604, however, indigenous peoples were here for thousands of years, including Algonquian-speaking natives in the early 1600s.

Maine was part of the Commonwealth of Massachusetts until 1820 when its citizens voted to secede and become a separate state. Maine was admitted to the Union as the 23rd state on March 15, 1820. Its name comes from an ancient French province of the same name. Its nickname is the “Pine Tree State,” as 90 percent of its land is forest. Not surprisingly, most of Maine’s economy is related to timber and the production of paper and paper products although the millions of tourists who flock each summer to “Vacationland” are a significant source of revenue.

The current flag of Maine features the state coat of arms on a blue field and was adopted in June of 1909. In the center of the shield, there is a moose resting under a tall pine tree. The farmer and seaman represent reliance on agriculture and sea. The North Star represents the state motto – Dirigo (Latin for “I Lead”). 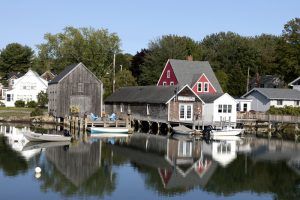 Fort Western on the Kennebec River

The Kennebunks of Maine – History Along the Southern Coast

Should fate unkind send us to roam,
The scent of the fragrant pines,
the tang of the salty sea
Will call us home.