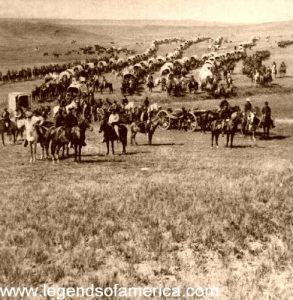 General George and the 7th Cavalry

The Kidder Massacre occurred near present-day Goodland, Kansas, on July 2, 1867, when Lakota Sioux and Cheyenne warriors attacked a detachment of ten enlisted men and an Indian scout under the leadership of Second Lieutenant Lyman S. Kidder. The fight occurred during Hancock’s War on the western plains.

On June 1, 1867, Lieutenant Colonel George A. Custer left Fort Hays, Kansas, with about 1,100 men of the Seventh Cavalry to quell Indian uprisings threatening the area. After patrolling north to Fort McPherson on the Platte River in Nebraska, he and his men headed south to the forks of the Republican River near Benkelman, Nebraska. During their patrol, the troops saw smoke signals during the day and flaming arrows at night but did not engage in hostilities.

In the meantime, General William T. Sherman, commanding the forces at Fort Sedgwick near Julesburg, Colorado, wanted to send messages to Custer and dispatched 25-year-old Lieutenant Lyman S. Kidder of Company M, 2nd Cavalry, to find Custer and give him the messages.

Headed to where Custer and his men were believed to be encamped on the forks of the Republican River, some 90 miles southeast of Fort Sedgwick, Kidder, along with a ten-man patrol and a Sioux Indian Guide named Red Bead, left the fort on June 29.

Kidder reached Custer’s campsite on the evening of July 1 but found it abandoned. Unbeknownst to Fort Sedgwick, Custer had left the area, scouting further south, then northwest. In the moonlight, Kidder mistook a trail of a wagon train that Custer had sent to Fort Wallace for Custer’s trail. He and his men then followed the wrong path.

About noon the next day, a group of Lakota Indians discovered Kidder’s party north of Beaver Creek, a tributary of the Republican River. The Lakota then alerted several nearby Cheyenne Indians, and the warriors approached the soldiers. Seeing the Indians, Kidder and his troops veered off to the southeast, making for the valley of Beaver Creek, about 12 miles north of present-day Edson, Kansas. As they fled, some of the soldiers were shot down on a ridge above the creek, but the rest made it to a defensive position in a small gully about 50 yards north of the creek. However, the Lakota dismounted and crept up on foot while the Cheyenne circled the gully. Though the soldiers fought bravely, killing two Indian horses, they were hopelessly outnumbered. Kidder, all his men, and the Lakota scout were killed, some having been tortured before their deaths and their bodies mutilated and burned. Two Lakota were also slain in the foray, including Chief Yellow Horse.

In the meantime, Custer, having received no word from General William T. Sherman, began to move his troops toward Fort Sedgwick. He telegraphed the fort for new orders upon arriving at Riverside Station some 40 miles to the west. He learned that he had missed the Kidder patrol, and concerned for their safety, he left immediately and headed back south. They first came upon a dead army horse on the trail, then signs of a running battle for a few miles along Beaver Creek. On July 12, they found the decomposed bodies of Kidder and his party in a ravine north of Beaver Creek in northern Sherman County, Kansas. The bodies had been badly mutilated, and all had been scalped except the Indian guide.

“Each body was pierced by from 20 to 50 arrows, and the arrows were found as the savage demons had left them, bristling in the bodies.”

— George Custer, in his book My Life on the Plains

The men were first buried in a common grave on a hill above the ravine but were later re-interred at Fort Wallace. The bodies were moved to Fort Leavenworth in the 1880s, except for Lieutenant Kidder. Kidder’s father, Judge Kidder, came to Sherman County in February 1868, identified the body by a shirt his mother had made him, and returned with the body to their home in Minnesota, where his son was buried in the family plot in St. Paul.

On August 3, 1969, the Friends of the Library of Goodland, Kansas, held a dedication ceremony for a historical marker and monument.