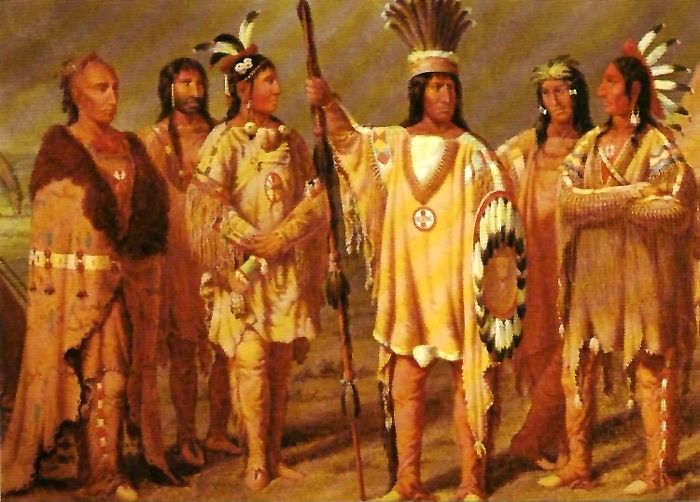 The Wyandot or Huron are an Iroquoian-speaking people made up of a number of bands, whose ancestral lands were in southern Ontario, Canada. They later moved to Michigan, Ohio, Kansas, and Oklahoma.

They called themselves “Wendat” meaning “island people” or “dwellers on a peninsula.” Their name was rendered variously as Guyandot, Guyandotte, Ouendat, and Wyandotte. The French, however, called members of a four-band group Huron, a derogatory name derived from their word “hure” meaning rough or ruffian. This has persisted as their usual name in Canada.

Like other Iroquoian peoples, they were farmers who supplemented their diet with hunting and fishing. The women cultivated several varieties of corn, squash and beans, and collected nuts, fruit, and wild roots. The men did the hunting and fishing and built houses, canoes, and tools. They lived in longhouses, similar to other Iroquoian cultural groups, in villages that were fortified against enemy attack. They engaged in trade with neighboring tribes, especially for tobacco. Like other Iroquoian peoples, the Wyandot had a matrilineal kinship system, and children were considered born to the mother’s family and took their status from hers.

The people first made contact with Europeans after the French began to explore North America in the 17th century. When the tribe heard about these newcomers, some of the Wyandot decided to go and meet them in Quebec and made an alliance with the French in 1609. At this time, the people were estimated at about 30,000 people.

In 1639, they were described by Jesuit missionary Francois du Peron:

“They are robust, and all are much taller than the French. Their only covering is a beaver skin, which they wear upon their shoulders in the form of a mantle; shoes and leggings in winter, a tobacco pouch behind the back, a pipe in the hand; around their necks and arms bead necklaces and bracelets of porcelain; they also suspend these from their ears, and around their locks of hair. They grease their hair and faces; they also streak their faces with black and red paint.”

By this time, they had been devastated by European infectious diseases, such as measles and smallpox. The Jesuits recorded their number as 20,000, living in 32 villages with 700 dwellings. 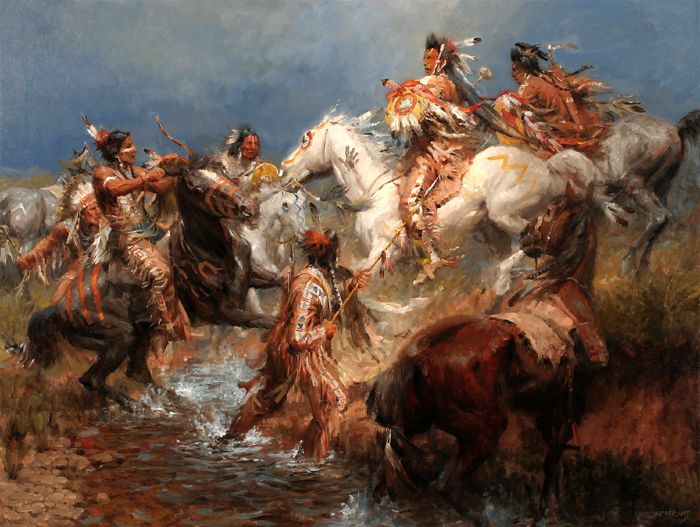 Though they were of Iroquois lineage, they had a long history of wars with the fierce Iroquois Confederacy. These wars continued once the French and English became involved in the fur trade business. The conflict between many tribes intensified as they struggled to control the lucrative fur trade and satisfy European demand. The French allied with the Wyandot and the Iroquois allied first with the Dutch and later with the English. In March 1649, and Iroquois party of about 1000 warriors entered the Wyandot country, burned their villages, and killed 300 people. The Iroquois also killed many of the Jesuit missionaries and those that survived burned the mission in order to prevent its capture. The extensive Iroquois attack shocked and frightened the surviving Wyandot. In May, they burned 15 of their own villages to prevent their stores from being taken and fled as refugees to surrounding tribes. About 10,000 fled to Christian Island in Lake Huron. Most who fled to the island starved over the winter. Those that survived relocated to an area near Quebec City, Canada.

In the late 17th century, the Wyandot merged with the remnants of other tribes that had been overrun by the Iroquois, including the Tionontati and moved into lower Michigan and northern Ohio.

The Wyandot became allies of the French, fighting against the British during the French and Indian War from 1754 to 1763. However, during the American Revolution of 1775-1783, they fought with the British. Near the end of the war, the Wyandot were regarded as fierce warriors and when Colonel William Crawford led an expedition against them at Upper Sandusky, Ohio in 1782, his army was defeated and Crawford was burned at the stake. On another occasion, when General Anthony Wayne ordered Captain William Wells to go to Upper Sandusky and bring in a prisoner who could tell them about the American Indians’ plans, Wells replied that he “could bring in a prisoner, but not from Sandusky, because there were none but Wyandot at Sandusky and they would not be taken alive.” 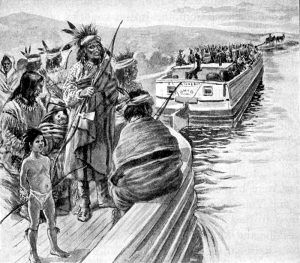 On the Miami and Erie Canal, the last Wyandots leave Ohio.

When the Northwest Indian War began in 1785 between the United States and a confederation of numerous Native American tribes for control of the Northwest Territory, the tribes were aided by the British. In the Battle of Fallen Timbers 1794, General Anthony Wayne defeated the Wyandot and other Ohio American Indian peoples. The Treaty of Greenville in August 1795 ended the war and the Wyandot surrendered most of their Ohio lands. They ceded more land in northern Ohio and southern Michigan in the Treaty of Detroit in 1807.

In 1842, under the increasingly aggressive U.S. Indian Removal policy, the Wyandot were made to give up their claims to their reservation at Upper Sandusky, Ohio and the next year were sent to a reservation in what is now Wyandotte County, Kansas. After the Civil War, the Ohio Wyandot were removed to Oklahoma.

Today, the Wyandot have four bands with recognition in the U.S. and Canada:

In February 1985, the U.S. government agreed to pay descendants of the Wyandot Indians $5.5 million, in partial compensation for the exploitative treaty of 1842.

In 1999, representatives of the far-flung Wyandot bands of Quebec, Kansas, Oklahoma, and Michigan gathered at their historic homeland in Midland, Ontario, and formally re-established the Wendat Confederacy.

© Kathy Weiser/Legends of Kansas, updated May 2020.