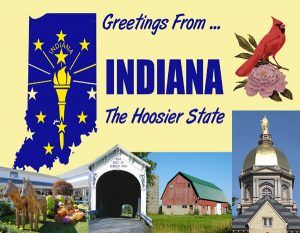 Greetings from Indiana, The Hoosier State. Postcard and Poster are available at Legends’ General Store.

One of eight states in the Great Lakes region, the state’s name means “Land of the Indians.” Known as the Hoosier State, the meaning of the term is debated but has referenced those living there since the early 1820s. It is the 38th largest state by area and the 17th most populous. Its capital is the largest city, Indianapolis. It is one of 13 U.S. States divided into more than one-time zone.  Most of the state observes Eastern Time; however, 12 counties currently observe Central Time. Although Indiana had not observed Daylight Savings Time in the past, starting in April 2006, the entire state changed its clocks to DST.

Visitors enjoy a range of scenes from quiet hills to sand dunes to Lake Michigan’s shores. More adventure can be found in the vibrant city of Indianapolis & its famous motor speedway, or touring numerous Amish communities and charming towns that border the Ohio River, or a trip to Brown County, dubbed ‘The Art Colony of the Midwest.’

Flag of Indiana – A gold torch surrounded by an outer circle of thirteen stars, an inner semi-circle of five stars, and a 19th, larger star at the top of the torch, crowned by the word ‘Indiana,’ representing Indiana’s admission to the Union as the 19th state. It was officially adopted on May 31, 1917, and has remained unchanged.  A previous ‘unofficial’ flag featured a buffalo and the state seal. 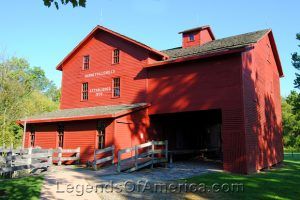 The Bonneyville Mill site dates back to 1832, but the actual Mill didn’t open until 1837 (despite the historic name and date painted on it). Photo by Kathy Alexander. 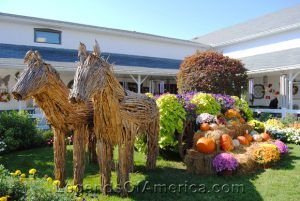 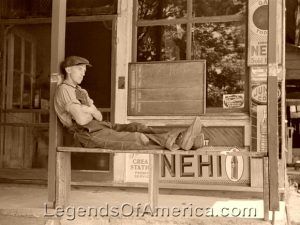