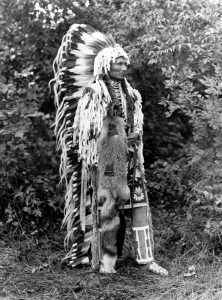 Of the Waiilatpuan language stock, the Cayuse tribe was initially located in northeastern Oregon and southeastern Washington state. They call themselves Liksiyu. The tribe was always closely associated with the neighboring Nez Percé and Walla Walla and was regarded by the early explorers and writers as belonging to the same stock. However, they were linguistically independent. The word Cayuse is derived from the French cailloux, meaning “Rock People” because of the rocky environment of parts of their homeland.

Before European contact, the Cayuse, Umatilla, and Walla Walla people were 8,000 members strong. Living in the Columbia River region for more than 10,000 years, they moved in a large circle from the lowlands along the Columbia River to the highlands in the Blue Mountains. They once were one of the most numerous and powerful tribes of the Plateau Culture area, living a semi-nomadic lifestyle of fishing, hunting, and gathering wild plants for food.

The introduction of the horse in the 1700s brought about a change in their lifestyle as they adopted some of the cultures of the Plains Indians — hunting buffalo and using teepees. They soon became skilled horsemen and horse breeders. 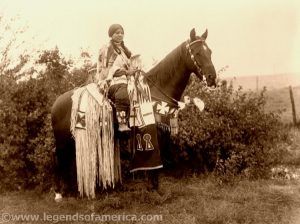 The Cayuse came into conflict with the white settlers when the Oregon Trail was opened. In 1838 a mission was established among the Cayuse by Marcus Whitman at the present town of Whitman, Washington. In 1847 a measles epidemic killed about half of the tribe. Because Whitman was unable to check the epidemic, some Indians came to believe he was poisoning them to make way for settlers. As a result, the Cayuse attacked the mission on November 29, 1847. Known as the Whitman Massacre, 13 people were killed, including Marcus and Narcissa Whitman, and 49 people were captured. The massacre set off the Cayuse War (1848) and temporarily ended Protestant missionary efforts in the Oregon country.

After the battles raged for seven years, the Cayuse were defeated and moved to the Umatilla Reservation in 1855. The U.S. Government negotiated a treaty with the Cayuse, Umatilla, and Walla Walla tribes in which 6.4 million acres were ceded in exchange for a reservation homeland of 250,000 acres. As a result of federal legislation in the late 1800s, the size of the Umatilla Reservation was reduced to 172,000 acres.

By the turn of the century, their number was estimated at 400, but all mixed blood and their language were almost extinct.

Today, the Cayuse tribe shares a reservation in northeastern Oregon with the Umatilla and the Walla Walla tribes as part of the Confederated Tribes of the Umatilla Indian Reservation.