Folklore consists of legends, music, art, oral history, proverbs, popular beliefs, fairy tales, stories, tall tales, and customs that are the traditions of a culture or group. Often, there is a link between folklore and mythology and could easily include our other legends categories such as strange creatures, ghosts, and witches.

American folklore encompasses folk traditions that have evolved since Europeans arrived in the 16th century as well as Native American myths and legends. Many stories and tall tales are based on real-life historical figures such as Daniel Boone and Davy Crockett, while others are pure fiction such as Paul Bunyan and the Lone Ranger. Some narratives are born of exaggeration, others were created to help make sense of aspects of the world not understood at the time, and others to shape the ideals of society. Folktales are generally passed down from one generation to another and often take on the characteristics of the time and place in which they are told. They also often speak to universal and timeless themes. Many of these stories have contributed to the shaping of American culture and belief systems.

Superstitions are similar to folklore in that they are often passed down from generation to generation and have their basis in tales that date back for centuries. Logically, superstition is irrational, but still, we cross our fingers, avoid walking under ladders, pick up a penny for luck, and avoid making commitments on Friday the 13th. Over the years, superstitions have developed from ignorance, misunderstandings of science, fear of the unknown, and beliefs in magic and folklore. Early on, superstitions were often tied to religion and the supernatural and stem from the same human trait that causes us to believe in monsters and ghosts. However, studies have found that superstitions can sometimes work, because believing in something can improve performance.

Besieged By Starvation in Illinois

The Curse of the Famous Hope Diamond

The Flood At Santa Fe

The Gloucester Leagers of Massachusetts

The Governor’s Right Eye in California

How The Crime Was Revealed in Missouri

In a Trapper’s Bivouac

The Legend Of Devil’s Point, California

A Man With Two Lives

Pecos Bill – A Legend of the American West

The River of Lost Souls, Colorado 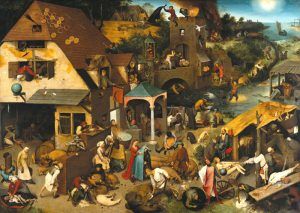 Folklore by Pieter Brueghel the Elder, 1559