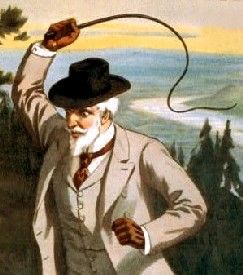 Like today and all of history, Scoundrels have unfortunately always been more than abundant. But, in history, they could often get away with their lies, cheating, tricks, and cons for much longer than they can today, as they moved from place to place, repeating the same old tricks before another new audience.

Sometimes, they changed their names, but often weren’t even required to, as back in the days of the Old West, most people didn’t ask questions about a newcomer’s past.

Benedict Arnold (1741-1801) – An American military officer who served during the American Revolution. He fought with distinction for the American Continental Army and rose to the rank of major general before defecting to the British side of the conflict in 1780.

Philip Arnold (1829-1878) – Along with John Slack, Arnold was a confidence man who masterminded the famous 1872 Diamond Hoax in San Francisco, California. Arnold walked away with more than half a million dollars.

“Dr.” Samuel Bennett (1791-1853) – From Shreveport, Louisiana, Dr. Bennett was one of the best-known “thimble artists” ever to cruise the Mississippi River.

Lou “The Fixer” Blonger, aka Louis H. Belonger (1849-1924) – The leader of the Blonger Brothers, Lou was the organizer of an extensive ring of confidence tricksters that operated for more than 25 years in Denver, Colorado.

Albert John Bothwell (1855-1928) – A self-important cattle baron of Wyoming, Bothwell was one of the main instigators of the infamous Wyoming Johnson County War.

John R. Brinkley – From 1917 through the 1930s, physician John Brinkley made millions of dollars by implanting goat testicles in men to restore their virility.

Edward “Big Ed” Burns – Burns was a conman and crime boss who worked in some of the most infamous camps of the Old West, including running a bunko gang in Leadville, Colorado, and Benson, Arizona, during the time that the Earps were in nearby Tombstone. Later he joined up with the Soapy Smith Gang in  Denver.

John Chivington – On November 29, 1864, Colonel John Chivington unleashed one of the worst Indian massacres in American history, the slaughter of some 150 Cheyenne and Arapaho women, children, and elderly at Sand Creek, Colorado. 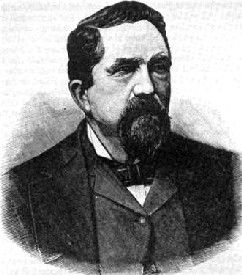 George H. Devol (1829-1903) – Probably the greatest riverboat gambler in the history of the Mississippi River, Devol was also a con artist, a fighter, and a master at manipulating men and their money.

James DeWolf (1764 -1837) – A was a slave trader, privateer during the War of 1812, and a state and national politician; DeWolf was the leading figure in the most active slave-importing family in American history. Part of an elite Rhode Island clan, he enjoyed a life of extreme luxury paid for by the suffering of others.

James Joshua Dolan (1848-1898) – One of the primary instigators of New Mexico’s Lincoln County War, James Dolan, attempted to control the economy of Lincoln County in the 1870s.

“Swiftwater” Bill Gates (18??-1935) – An American frontiersman and fortune hunter, Gates became a fixture in the Klondike Gold Rush. Making a fortune, he squandered it drinking, gambling, and getting married multiple times (when he was already married.)

Mildred Gillars – From 1942 to 1945, the voice of frustrated actress Mildred Gillars was beamed worldwide from war-torn Europe. Dubbed “Axis Sally” by the Allies, Gillars would become one of the most reviled Americans of her time for her anti-Semitic rants as a German propagandist.

Isaac Harris and Max Blanck – On March 25, 1911, the greed of New York sweatshop owners Isaac Harris and Max Blanck resulted in the deaths of 146 workers in the tragic Triangle Shirtwaist Factory fire. Harris and Blanck had failed to conduct fire drills or provide adequate safety equipment, and they were so afraid that their seamstresses might steal a few scraps of cloth that they locked the door to one of the two stairways leading from their ninth-floor workshop. 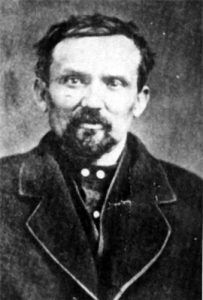 William “Canada Bill” Jones (18??-1880) – One of the greatest cardsharps in history, Jones practiced his three-card monte hustle on the Mississippi River.

Andrew P. Kehoe – Self-Centered and downright evil, Kehoe is responsible for the worst attack on a school in U.S. History at Bath Township, Michigan, in 1927. Read Massacre in Michigan – The Bath School Disaster.

James “Umbrella Jim” Miner – One of the best-known shell game men on the Mississippi River, James Miner was called “Umbrella Jim” for his habit of beginning his con game under an umbrella.

Lawrence Murphy (1831 or 1834-1878) – An Irishman who immigrated to the United States, Murphy was a Civil War Veteran, cattleman, and businessman, whose greed ultimately spawned New Mexico’s Lincoln County War.

Alfred G. Packer (1842-1907) – Prospector and guide in the Rocky Mountains during the 1870s, Alfred Packer confessed to cannibalism during the winter of 1874.

John Frederick Parker (1830-1890) – A Washington D.C. Police Officer who was one of four men detailed to act as United States President Abraham Lincoln’s bodyguards on April 14, 1865, the night Lincoln was assassinated at Ford’s Theatre. He had abandoned his post outside the entrance to the President’s box at the time that John Wilkes Booth shot the president. Though drinking in a nearby tavern, he went unpunished.

Pirates – Renegades of the Sea – Pirates and piracy on the high seas are almost as old as history itself. Long before the first permanent English settlement was established at Jamestown, Virginia, in 1607, piracy flourished off the North American coast.

John Slack – Along with Phillip Arnold, Slack was one of the perpetrators of the 1872 Diamond Hoax in San Francisco, California.

Jefferson Randolph “Soapy” Smith II (1860-1898) – The most famous bunko man in the Old West, Smith was a con artist and gangster who had a significant hand in the organized criminal affairs and operations of Denver and Creede, Colorado, as well as Skagway, Alaska from 1879 to 1898.

William Stoughton (1631-1701) – Massachusetts Lieutenant Governor Stoughton was the homicidal judge who presided over the Salem witch trials of 1692. Rigid and prideful, the 60-year-old bachelor was educated for the ministry and had no legal training. During the trials, he sent 19 innocent victims to the gallows. Unlike some of the other magistrates, he never admitted to the possibility that his acceptance of such evidence was in error.

Edward Teach, aka Blackbeard (1680-1718) – Blackbeard, more than any other, can be called North Carolina’sown pirate, although he was not a native of the colony and cannot be considered a credit to the Tar Heel State.

William Thompson – Operating in the 1840s, Thompson was a con artist whose deceptions caused the term “confidence man” to be coined.

William B. “Lucky Bill” Thornton (182?- 1858) – A proficient shell game operator who plied his “trade” in California and Nevada. 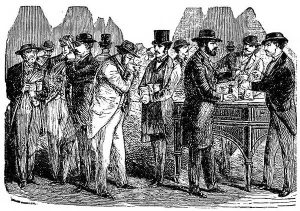 Joseph “Yellow Kid” Weil (1877-1975) – One of the most famous American con artists of his era, Weil stole over eight million dollars running various scams and was one of the inspirations for the Academy-award winning film The Sting.