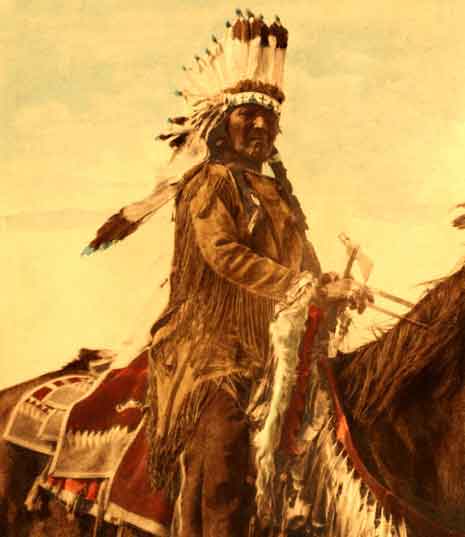 The Arapaho Indians have lived on the plains of Colorado, Wyoming, Nebraska, and Kansas since the 17th Century. Before that, they had roots in Minnesota before European expansion forced them westward. They were a sedentary, agricultural people living in permanent villages in the eastern woodlands. However, that changed when they moved west, and the tribe became a nomadic people following the great buffalo herds.

The Arapaho refer to themselves as ‘Inuna-Ina’ which translates to “our people.” Their language is of Algonquin heritage, as is that of their close neighbors, the Cheyenne. When they began to drift west, the Arapaho soon became close allies of the Cheyenne tribe and were later loosely aligned with the Sioux.

The Plains Arapaho soon split into two separate tribes, the northern and southern Arapaho. The Northern Arapaho lived along the edges of the mountains at the headwaters of the Platte River, while the southern Arapaho moved towards the Arkansas River.

The Arapaho lived in teepees made from buffalo skins that could be easily erected and taken down as the tribe moved from place to place. Becoming expert buffalo hunters, the buffalo provided them with virtually everything they needed. They also hunted for elk and deer, fished, and ate various berries and plants. During hard times, they were also known to eat their dogs.

The tribe lived together in small bands, predominantly determined by birth. However, members were free to move between bands at will. Once a year, all of the bands would assemble for the Sun Dance Festival, an eight-day event at the time of the Summer Solstice. The festival preceded the great summer buffalo hunt. A large open-air Sun Dance Lodge would be constructed of wooden poles in the middle of the camp, with the Sun Dance pole standing in the middle. Individual teepees would be erected around the lodge in a large circle.

The participants of the dance fasted during the dance and painted their bodies in symbolic colors. Dressed in aprons, wristlets, and anklets, the dancers would stare at the Sun while dancing hypnotically before being impaled to the Sun Dance pole by way of tiny stakes punctured into the skin. The Sun Dancer was not to show any signs of pain during the ritual and, if able to do so, would be rewarded with a vision from the Great Spirit. 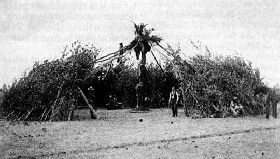 The annual Sun Dance was their greatest tribal ceremony, but they were also active proponents of the Ghost Dance religion when it was made popular in the 1880s.

The Arapaho are a very spiritual people, believing in an overall creator they call Be He Teiht. As with many Native American peoples, they believe in a close relationship between themselves, the animals of their world, and the land on which they live. The Arapaho also have a deep respect and appreciation for the wisdom of their elders.

By 1840, the Arapaho had made peace with the Sioux, Kiowa, and Comanche but were constantly at war with the Shoshone, Ute, and Pawnee until they were confined upon reservations.

When the white man pushed west, the Arapaho generally maintained friendly relations and became great traders with the white men. But as the pace of western expansion increased, the Arapaho and the other Plains Indians found themselves being pushed further and further west. In the meantime, the buffalo, which they depended upon, were being shot by the thousands and left to rot by the newcomers. 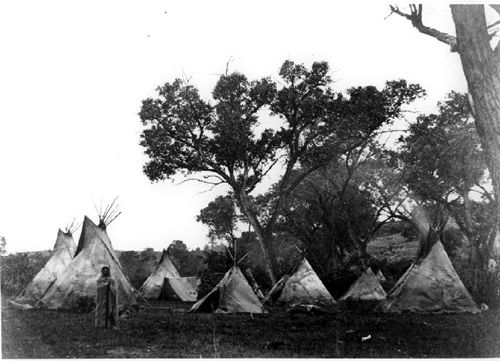 In 1851 a treaty was signed between the U.S. Government and the Northern Arapaho and Cheyenne, which granted the tribes land encompassing one-sixth of Wyoming, one-quarter of Colorado, and parts of western Kansas and Nebraska. 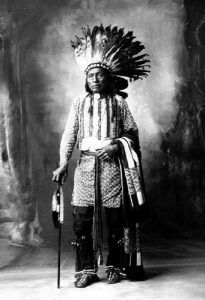 The southern Arapaho were placed on a reservation in Oklahoma with the Southern Cheyenne. Over time, the Cheyenne and Arapaho cultures grew similar. In 1892, Oklahoma Territory was thrown open to white settlement, and the Indians received allotments in severalty, with the rights of American citizenship.

Today the Northern Arapaho live on the Wind River Reservation north of Lander, Wyoming. Nestled between the scenic Wind River Range and the Owl Creek Mountains, the 2.2 million acre reserve is shared by 3,500 Eastern Shoshone and 7,000 Northern Arapaho.