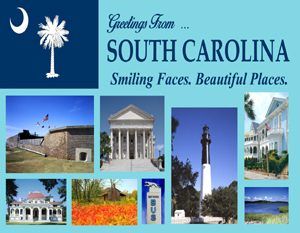 Originally part of the Province of Carolina, the state was first settled by English immigrants, mainly from Barbados. The colony was initially named in honor of King Charles I (Carolus being Latin for Charles). Parts of Carolina — mostly the coastal areas — were colonized earlier by Spain, but battles between the Spanish and the Native Americans caused the Spanish people to retreat southward. The Province of South Carolina was the first of the 13 colonies that declared independence from the British Crown during the American Revolution. South Carolina later became the first state to vote to secede from the Union preceding the Civil War on December 20, 1860.

The state prospered from the fertility of the Low Country and the harbors, such as Charleston. Settlements spread, and trade in deerskin, lumber, and beef thrived. Rice cultivation was developed on a large scale with the help of the skills and techniques of slaves imported from rice-growing regions of Africa.

From Table Rock in the foothills of the Blue Ridge Mountains to the wide sandy beaches of the coastline, clear waters of Lake Jocassee, to the cobblestone streets of historic Charleston, there is much to see and do in the Palmetto State.

Asked by the Revolutionary Council of Safety in the fall of 1775 to design a flag for the use of South Carolina troops, Col. William Moultrie chose a blue that matched the color of their uniforms and a crescent which reproduced the silver emblem worn on the front of their caps. The palmetto tree was added later to represent Moultrie’s heroic defense of the palmetto-log fort on Sullivan’s Island against the attack of the British fleet on June 28, 1776.

Great Wagon Road of the East 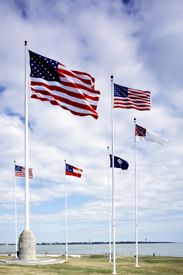